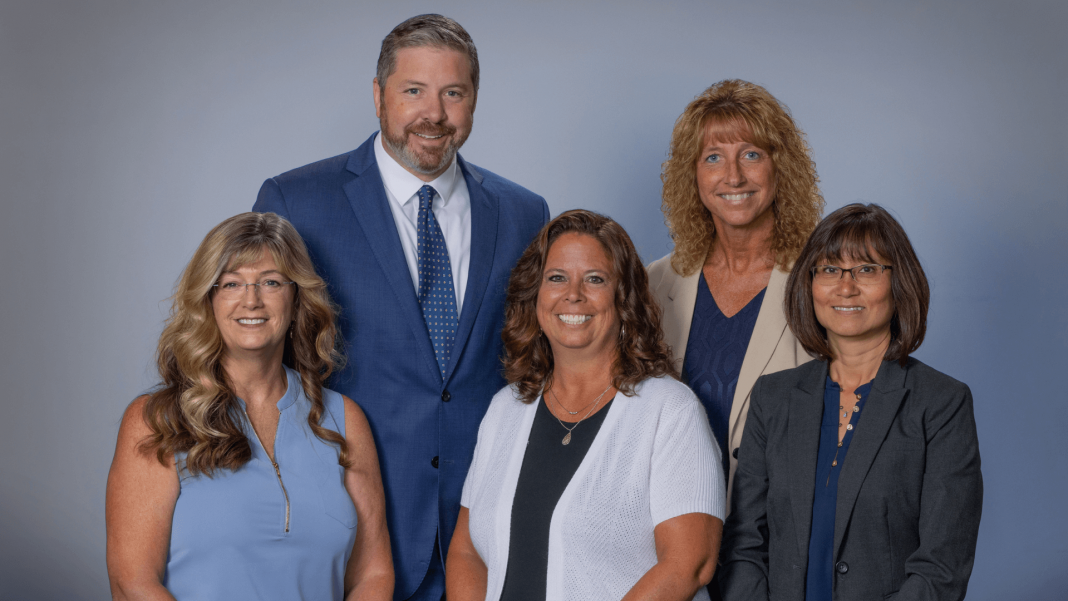 Justin Bourgeois, Jennifer Daigle, Beth Morin, Kelly Paul, and Kimico Perry have all been promoted to this prestigious position.

“Each of these individuals has demonstrated their commitment to CNB, our customers, and our employees, while assuming increasing leadership roles,” Austin said. “Congratulations to all.”

In 2011, he was recognized as a Rising Star by Vermont Business Magazine. Bourgeois holds a Bachelor of Science in Business Management from Champlain College and has attended the Northern New England School of Banking as well as many Risk Management Association (RMA) trainings and seminars.

Bourgeois volunteers his time in support of local youth academic and sporting activities and is a past Board Member of both Central Vermont Economic Development Corporation and Montpelier Alive.

He is currently working in close coordination with the Montpelier Development Corporation.

She has taken the Principles of Banking class through the Center for Financial Training and Education Alliance and attended the Northern New England School of Banking. She’s also taken several courses through the Vermont Bankers Association and Risk Management Association (RMA).

Daigle recently graduated from the New England School for Financial Studies at Babson.

Formerly, she served as Chairperson of the RMA Vermont Chapter and continues to be an active Board Member.

She also assists several non-profit organizations with their financials and has taken part in fundraising initiatives to benefit the Department of Children and Families in Newport.

Daigle also helps the Department of Children and Families as a Foster parent.

Morin started working for CNB in 1985 as a Secretary in the Loan and Trust departments and in 1986 assumed the title of Bank Secretary.

In 1994, she held the position of Administrative Assistant and in 1997 she was promoted to Collections Manager and Special Asset Officer.

Morin has taken several courses through Center for Financial Training Education Alliance and is a graduate of the Northern New England School of Banking.

She serves her community as a member and Treasurer for the American Legion Auxiliary, Unit #23.

Paul was hired by the bank in 1988 as a Teller in the Derby office.

In 1991, she accepted the position of Personal Banker and in 1996 was promoted to Derby Office Supervisor.

In 1999, she worked closely with Human Resources as the bank’s Training Coordinator. In 2004, Paul became the bank’s Compliance Specialist.

In 2005, she was promoted to Compliance Officer and in 2008 to Assistant Vice President.

In 2010, she was promoted to Vice President, Compliance and Enterprise Risk Manager.

She has received a General Banking Diploma from the ABA and completed the ABA Certified Supervisor’s Training course.

She has also obtained the Anti-Money Laundering Professional Certification from BAI.

Paul is a Certified Regulatory Compliance Manager as designated by the Institute of Certified Bankers.

She is currently enrolled in the ABA Stonier Graduate School of Banking.

Perry was hired by Community National Bank in 1991 to work as a part-time Teller in the Newport office.

In 1992, she accepted a full-time position in the Barton office.

In 2011, she was promoted to Assistant Vice President and Human Resources Officer.

In 2013, she was promoted to Vice President and Human Resources Officer.

Perry has attended the Northern New England School of Banking and has received certification by the Society for Human Resources Management as a Professional in Human Resources.

She has served her community as a longtime Board Member for the Irasburg Village School and as Treasurer/Secretary of Lake Region Youth Baseball.

She currently sits on the Board for RuralEdge.