IRASBURG — Members of the Irasburg Ridgeline Alliance, a citizens’ group dedicated to preserving the ridgelines of Irasburg from development by industrial wind turbine projects, confirmed the date of a town-wide vote on the issue.

The Irasburg Select Board will hold a Special Select Board meeting at 6:30 p.m. on Thursday, October 1, at the Irasburg Town Hall. At the meeting, Irasburg’s registered voters will cast their ballots on the question “Shall Kidder Hill, or any other ridgelines of the town of Irasburg be used for development by industrial wind turbine projects?”

Although Blittersdorf has not yet presented his plans to Vermont’s Public Service Board, which reviews such proposals, Irasburg’s citizens have already made known their opposition to the project.

“The Northeast Kingdom has become the dumping ground for every ill-conceived, poorly sited renewable energy project the developers can dream up,” Rodgers said. “The region already produces more energy than we can consume. Enough is enough! Environmental and energy issues are real, but we know that there are far more effective ways to address them without ruining the quality of life that defines us as Vermonters.”

Now Irasburg’s citizens plan to make their views on the proposed industrial wind project official by casting their ballots at the Special Select Board Meeting on October 1.

Although the October 1 vote will not be binding on the Public Service Board’s decision whether or not to allow the Kidder Hill Project to go forward, Irasburg Ridgeline Alliance (Ira) members believe that the results will clearly communicate the town’s overwhelming opposition to the project. They point to Vermont Governor Peter Shumlin’s pledge that he will not support building energy projects in towns that don’t want them.

In a 2012 Vermont Public Television interview, Shumlin said, “I have always said and I will always say I believe that no energy project should be built in a town in Vermont where the residents of that community don’t vote affirmatively to host it. We shouldn’t send them into towns that don’t want them. We shouldn’t build energy projects where they are not wanted.”

“Two 500-foot wind towers looming over our village would have an enormous impact on our town,” she said. “Here in Vermont, where we’re known worldwide for our town-meeting democracy, it is inconceivable that a decision with so many irreversible consequences for our citizens would be made without regard for the democratic process. By our votes next Thursday, we will make our voices heard and show our faith that democracy still counts in the Green Mountain State.” 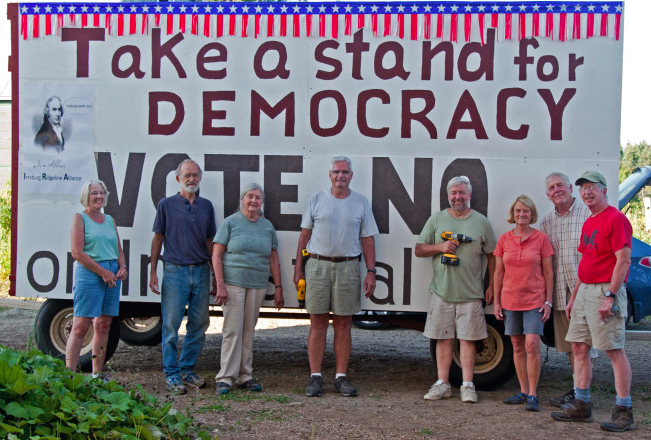 IRASBURG — Police responded to a two-vehicle crash in Irasburg this morning.
BROWNINGTON — A man and a woman from Brownington were arrested and
IRASBURG — The Leach Public Library in Irasburg will hold the third
IRASBURG — A home was burglarized in Irasburg on Saturday. Police say
IRASBURG — The University of Irasburg is officially open, taught by the
Go to Top