BEEBE, QC — Sometimes given the nickname “chess on ice,” curling is a sport that has roots in medieval Scotland, but is most firmly established in Canada, having been brought here by Scottish emigrants.

Located just up the street from the U.S. border, the Border Curling Club in Beebe, Quebec, is the place to go if you want to learn more about this interesting sport. With a membership just about split between 40 percent American and 60 percent Canadian, the club is truly international. 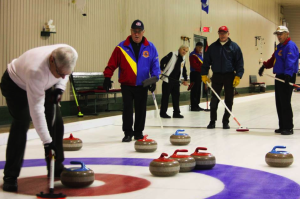 So what is curling anyway? Many of us have seen it played on television during the Olympics, but might not fully understand the game.

Curling is a sport where players slide polished granite stones on a sheet of ice towards a target area segmented into four concentric circles, known as the “house.” The stones, also called “rocks,” weigh in at 47 pounds each.

Two teams, each consisting of four players, take turns sliding the rocks across the ice toward the house. Each team has eight rocks. The purpose is to accumulate the highest score, with points scored for the rocks resting closest to the center of the house at the conclusion of each “end,” which is completed when both teams have thrown all of their rocks. A game may consist of ten or eight ends.

The path of the rock can be influenced by two sweepers with brooms who accompany it as it slides down the ice, using the brooms to alter the state of the ice in front of the rock. The more they sweep the ice, the more the rock will travel.

It takes a great deal of strategy and teamwork as players work together to choose the ideal path and placement of a rock for each situation. 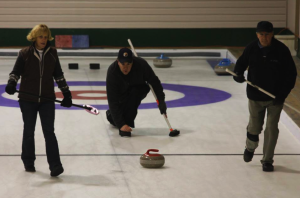 Patricia Vana, from Derby, has been curling for fifteen years. She plays three times a week. Her career teaching French at North County High School fit well with being a member of the curling club. She used to bring groups up to the club to expose them to the French language. For Vana, the Border Curling Club provides a place for neighbors from both sides of the border to come together, and she enjoys that curling is something anyone can do.

Paul Bosco, who curls with his wife Elizabeth, is finding his way back to the sport after taking a 25 year hiatus. 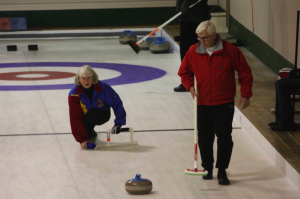 “I joined this club back in 1979, and I was a member for about five years,” Bosco said. “I took twenty-five years off when I moved out to Jay while I was raising my family, but I’m back now and have been curling here for about six years.”

Bosco also enjoys the way the sport challenges the physical and mental ability of those who play.

“It’s nice because it’s almost like being outdoors, and curling is a game that takes finesse and strategy,” Bosco said. “You have a combination of both physical and mental challenges to face.”

Getting involved in curling is not as difficult as it might seem as a beginner. The Border Curling Club offers clinics and workshops for newbies, and they even have some equipment that you can use while getting started.

“The best thing to do to get involved in curling if you might be interested is to come to one of our free workshops, and give it a try,” said Chris Planetta, who coaches the Stanstead College curling team. “The Friday night mixed league is a time for people to come out and have fun, and is less competitive than the Tuesday night league. On Saturday morning we have a program for kids and teenagers where they can try it out. It’s a lifelong sport. 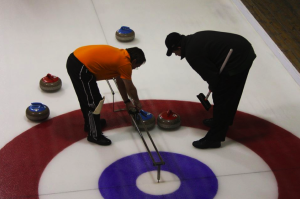 Anyone interested in trying curling can visit one or both of the free upcoming curling workshops:

For highlights from Tuesday night, watch the short video below: