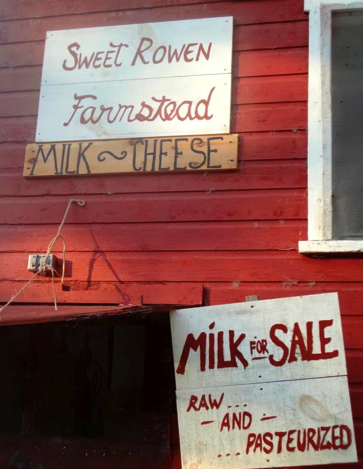 WEST GLOVER — Sweet Rowen Farmstead in West Glover was just awarded a grant of $24,661 by the USDA, to help in hiring and employee training, as well as developing nutritional labels for their products. The award was part of the USDA’s Value-Added Producer Grant program.

Sweet Rowen Farmstead is a grass-based, family owned and operated dairy farm. They milk a small herd of Randall Lineback cattle, a heritage Vermont breed. Their barn is situated between woodlands and several rich fields where they grow and cut their own hay.

Sweet Rowen began selling milk in 2011, bottling a small volume each week at a rented facility in Albany. In September of that year, the bottling room was lost during a devastating fire, forcing the farm to reconsider their options. They decided to build their own creamery on their family land, enabling them to bottle all of their milk on-site and sell it locally.

The creamery opened in May of 2012, and now produces small batches of delicious, non-homogenized milk and fresh cheese.

“The Value-Added Grant Program has been a great success in Vermont and fits well into our efforts to upgrade and diversify our economy,” Senator Patrick Leahy said. “Value-added agriculture creates new jobs, contributing to community and rural economic development and building on the record and reputation for quality that has become a Vermont trademark. Rewarding and supporting the innovation and hard work of Vermont farms like Sweet Rowen Farmstead is a great way and a smart way to move our agricultural economy forward.”

Since 2009, the USDA has awarded 863 Value-Added Producer Grants totaling $108 million. Twenty percent of the grants and 16 percent of total funding has been awarded to beginning farmers and ranchers. The 2014 Farm Bill increases mandatory funding for the program from $15 million to $63 million over five years, while also reauthorizing an additional $40 million in discretionary funding.