Secretary of the Vermont Agency of Agriculture says that Vermont is leading the country in terms of Agriculture, but faces challenges from the Food Safety Modernization Act

NEWPORT — Chuck Ross, the secretary of the Vermont Agency of Agriculture, was in Newport on Tuesday to listen to the concerns of local farmers. The meeting was the first in a series of listening sessions, the rest of which will take place over the next few months throughout the state.

The low turnout in Newport for the meeting made it more of a listening session for the audience, as Ross had plenty to say in regards to the good things that are happening with Vermont’s agriculture. He also warned of the threat that the state faces in light of the Food Safety Modernization Act draft that was recently passed by Congress.

One thing that Vermont’s agriculture has going for it, is Chuck Ross himself. The Secretary of Agriculture has been named President of the National Association of State Departments of Agriculture. Listening to him speak on Tuesday, it was clear that as a state, we have one of the most knowledgeable minds in the industry working for us.

Ross laid it out for those in attendance. As a state, we are leading the way, and we also will face severe challenges set by the Food and Drug Administration.

“When you look at the state of Vermont, and what’s happening in agriculture, it’s really exciting,” Ross said. “We are leading the country in a number of ways. We’re on the cutting edge.”

According to Ross, when you talk about agriculture in Vermont, you have to start with dairy. The dairy farms support the dairy manufacturing industry in the state. This provides many Vermonters with quality jobs.

“I can’t underscore enough the importance that dairy is to the state. A lot of the other agriculture, like cheese making and yogurt, is what I call dairy plus, because it’s supported by the dairy farms. Also, the dairy farmers over the last 70 years have held the land, kept it open, and kept it productive.”

Ross went on to say that although there has been talk about herd numbers across the state decreasing, down about 2,000 cows over the last couple of years, the herd supply is fairly stable, and the milk supply is stable.

“Our farmers are getting better and better at producing more milk per cow, every year,” he said. 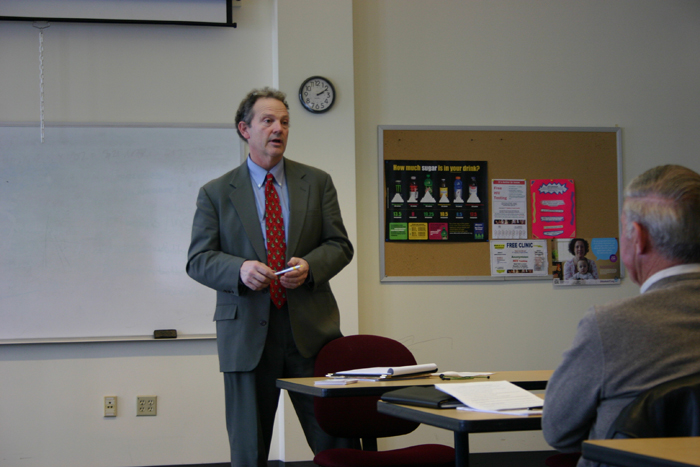 Ross talked about what he called the “agriculture renaissance,” happening in the state, that is bringing in a younger generation of farmers. This influx of younger farmers are proving to be successful in marketing and exporting their products all over the country, which is helping to build a new and diversified economic based agriculture. At a time when the average age of dairy farmers is in the 50’s, and the number of dairy farmers decreases, these new businesses are making a good partnership with the dairy community by putting less stress on the service industries that have been built around dairy.

Ross also pointed out that Vermont is leading the way in terms of diversification and localization of agriculture.

“Vermont is seen as one of the top three artisan cheese regions in the world,” Ross said. “Our artisan cheeses compete internationally, and do incredibly well in every competition they enter. But, you can’t do good cheese, without great milk.”

We are also number one when it comes to direct marketing of agriculture, with CSA programs, farmers markets, and roadside stands, driving this type of growth.

“People are copying what we’re doing in Vermont in terms of supporting and growing our local economies and communities by investing in agriculture,” Ross said.

The challenge that we face comes by way of the federal government, with the Food Safety Modernization Act. The draft is a set of regulations by the Food and Drug Administration, which was drafted in response to legislation passed by Congress to make our food system safer. According to Ross, as the draft stands today, it will seriously impact the state’s agriculture, making it much harder for farmers to do business.

“This is a huge cloud hanging over much of what we’re doing with agriculture in the state of Vermont,” Ross said. “Quite candidly, the FDA wrote a draft that is not well constructed to be useful, effective, or implementable in a way that works for agriculture in Vermont and many other states.”

Ross stated that people producing produce for direct human consumption are going to be regulated according to the Food Safety Modernization Act in ways that they have never been regulated before.

“Very significantly for the state of Vermont, the Pasteurized Milk Ordinance is potentially being rewritten,” Ross said. “The PMO has served us well. I’m scratching my head wondering why are they going to mess with something that has enabled us to produce the best food product for human consumption in the world, year after year.”

Ross said that many have been engaged in pressing the FDA not to take the draft set of rules, and make it a final set of rules. He said that they are requesting that a second draft be written.

While discussing what some of the new rules would be, Ross said that one says that you can not harvest a product for human consumption for nine months after you have applied manure. That would be a growing season in the state of Vermont. You would also have to wait 45 days to harvest a product that used compost as a soil amendment.

When asked if the FDA was considering a redraft of the rules as they stand, Ross said that he is optimistic.