The Town and the Village: Derby Line Voters Cross Town to Vote on the Same Issue 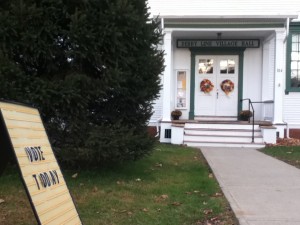 Derby―Voters from Derby and the village of Derby Line overwhelmingly voted yes to bond for the funds needed to move forward with a water system upgrade.

Voters in Derby were simply voting yes or no to borrow the $410,000 needed to help split the cost with the village of Derby Line for the new waterline to the Derby Elementary School. The town agreed to contribute to the cost of the new waterline extension because it was a safety issue, and currently there is not enough water flow to aggressively fight a fire if one ever broke out at the school.

The village of Derby Line voted yes to bond for the $1.2 million needed for the entire cost of the project, but, since they are also residents of the town, they were allowed to go to the ballot box at the Municipal Building in Derby Center, and vote on the $410,000 loan.

Village Clerk Sharon Booth and village Clerk Fay Morin reminded voters from the village that they had the opportunity to cast their votes across town as well.

Now that the bond vote is over, plans will move forward to upgrade the water system.

The installation of approximately 4,900 linear feet of new 8 and 10 inch diameter waterline will begin at Forest Avenue, run along Forest Terrace, and continue west through the corn field to Derby Elementary School.

The final design will be completed in February. Construction is set to begin in April and finish in September.

The average Derby Line resident resident pays about $370 per year for water. The village portion of the annual loan payment will be around $53,000, increasing the water rate an extra $85 dollars per year.

The town of Derby anticipates raising the funds to pay their portion of the annual loan payment through town property taxes.

The breakdown of the vote was as follows: