DERBY LINE — Inside the social hall of the First Universalist Parish in Derby Line, the atonal sounds of violinists and cello players warming up, echos off the walls. String bass player Jessica Griffen staggers in under the weight of her instrument. Once the orchestra has set up, music director Ken Michelli stands facing the musicians, ready to lead them into their first score. 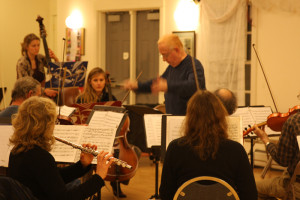 “Remember to be real secure with the entrances,” Michelli advises.

Over the next hour and a half, the Newport Area Community Orchestra, or NACO, as they are known, will rehearse for their upcoming concert at the Goodrich Memorial Library in Newport.

“This might be our best concert yet,” Mr. Michelli said to the group following rehearsal Tuesday night. “It happens every year at about this time, that things really start to click. Each year we continue to improve.”

Not only does the orchestra continue to improve, but they continue to grow as well. In their third season as an ensemble, the number of musicians involved has grown rapidly.

“We started with five members, but now we’re up to about thirty,” Michelli said. 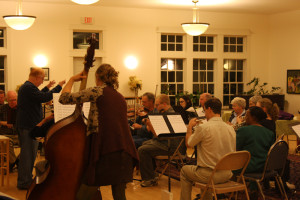 As members of the orchestra packed up their instruments, they were noticeably pleased with the way they are playing together. There was a sense of excitement in the room, with members realizing that NACO is maturing into a fine orchestra.

“I’ve been with this orchestra since its inception, and each year it just keeps getting better,” flute player Sue Brassett said.

Marc Semprebon, a horn player from Beebe Plain, expressed his appreciation of having a space like the hall of the First Universalist Parish to rehearse in.

“It’s nice to rehearse in this building because it’s big, and usually much louder than the places we will actually play,” he said. “It’s just a great building.”

Besides performing at various local venues throughout the year, the Newport Area Community Orchestra presents three annual concerts. They play once in the spring, and twice in the fall, with one fall concert done to raise money for the Haskell Opera House.

NACO’s fall concert at the Goodrich Memorial Library is Saturday, November 9, at 1 p.m. Admission will be free, however, to help support the orchestra’s efforts of bringing classical music to the Northeast Kingdom, a $5 donation at the door is asked.

NEK Day at the Statehouse 2022