WEST GLOVER — A dusting of snow sits on the cars parked outside Parker Pie. It’s cold, and everyone is reminded of winter. Inside, it’s warm, and people sit around sipping beer or wine, feasting on what is arguably the best pizza around. A soulful voice fittingly sings Bob Dylan’s, “Girl from the North Country.” The chatter has quieted, and everyone in the room hangs on to every note of the acoustic guitar, and every word of the song.

“If you go when the snowflakes storm, when the rivers freeze and summer ends,” the musician sings.

On the television, the Boston Red Sox are loosing to the Cardinals in Game 2 of the World Series, but people in the room are more interested in the musician as he continues his set. A bearded man walks around collecting tips for the musician inside an empty plastic beer pitcher.

The musician is Seth Yacovone, and to say that he is talented is an understatement. Mr. Yacovone has talent, but he has more than that. Gifted is a better way to describe him, and it’s a gift he shared with everyone at Parker Pie on Thursday night.

“My music varies a lot, depending on if I’m playing electric or acoustic. What I play is essentially a mixture of American music, from over the last fifty, sixty, or seventy years,” Yacovone said.

After already experiencing national recognition and success, Yacovone, who lives in Morrisville, is starting a new phase in his career.

At age 34, he has already accomplished things other musicians would envy.

When only 19 years old, he was invited to play with Vermont jam band Phish, in front of a crowd of 18,000 at the Worcester Centrum, in Massachusetts. Afterward, his band, the Seth Yacovone Band (SYB), opened for such acts as Ray Charles, Johnny Winter, Trey Anastasio Band, and BB King.

When asked how his sit in with Phish came about, he modestly recalled the experience.

“It came about very spur of the moment. They called me two days before it happened, so it wasn’t like I knew ahead of time or anything. It was crazy.”

After the success of the SYB, not to mention a grueling touring schedule, Yacovone decided to end the band in order to regroup, and push himself creatively into new territory. It was a decision that was good for him as a musician, and good for the people of Vermont. 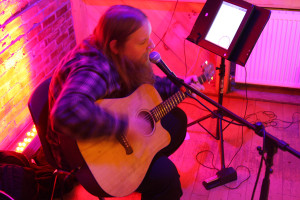 “When I’m playing solo, I tend to do about every other song as one that someone else wrote.”

With Yacovone’s originals as good as they are, nobody would have minded hearing an entire set of his own music. Except, for his version of “Girl from the North Country,” which, Thursday night at Parker Pie, was perfect.

For more information and tour dates for Seth Yacovone and the SYB, visit his website at: SethYacovone.Com

As most people in Orleans County know, Parker Pie has a great menu, and wonderfully fresh pizza. Thursday is music night, and there is no cover charge.