Demonstrators gather outside U.S. Port Of Entry in Derby Line to stand with Mi’kmaq Nation

Derby Line—It’s not often that you pass through a port of entry into the United States, and you’re greeted with the sounds of Native American drumming, chanting, and the smell of burning sage. If you entered the U.S. at Derby Line on Route 5 Saturday afternoon between 12-4 p.m., that was exactly how you were welcomed in.

Ten people came out Saturday afternoon to Derby Line to voice their opposition of the practice of hydraulic fracturing.

Hydraulic fracturing, or “fracking,” is the process of drilling and injecting fluid into the ground at a high pressure in order to fracture shale rocks to release natural gas inside. 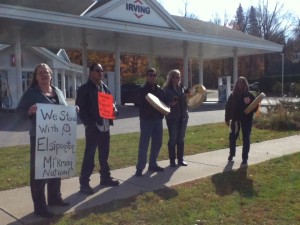 The demonstrators were particularly opposed to the practice when done on lands belonging to Native Americans. They stood in solidarity with a wave of protests that have broken out in New Brunswick, where members of the Mi’kmaq Nation have been taking a stand against a company conducting seismic testing, which many believe is a prelude to fracking operations.

The protests in New Brunswick have recently escalated, with Elsipogtog First Nation Chief Arren Sock, who had issued the company an eviction notice on October 1, and the band’s council, being arrested on Friday.

The demonstration in Derby Line was also part of a larger, worldwide movement scheduled for Saturday, known as “Frackdown Day.”

On U.S. Route 5, demonstrators, mostly Native Americans from the United States, gathered across the street from the port of entry, playing drums, chanting, and holding up signs in the direction of motorists entering the country. 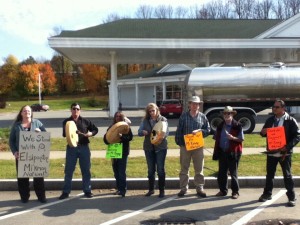 “Our hearts and prayers are with the Mi’kmaq Nation in New Brunswick, being forced to have fracking done on their land. The Canadian government is not respecting the native treaties,” Melody Nunn of St. Johnsbury said while taking a break from drumming.

Ms. Nunn went on to express her motivation for organizing the event coming after seeing images of clashes between Royal Canadian Mounted Police (RCMP) and protesters in New Brunswick.

“The image of the siege that will stay in my heart is a Mi’kmaq woman on her knees, holding an eagle feather as her only defense from several hundred RCMP with loaded rifles. It’s their land, and we’re here to stand in solidarity with our brothers and sisters across that boarder.”

The decision to stage Saturday’s demonstration so close to the port of entry was made late Friday night. Although they did not foresee any problems, they were aware of the possibility of running into opposition from authorities.

“The message today outweighs the outcome of any trouble we might face,” Kevin Carney stated when asked about the legality of demonstrating in the location. Mr. Carney traveled from New Hampshire with his wife to attend.

Like most of the cars that passed by after entering the U.S., Boarder Patrol agents waved to the group to greet them as they drove past during routine patrols of the area. It was a peaceful scene.

Members of the group were quick to point out that for them, the gathering was not a protest.

“We are not here as a protest. We are here with good in our hearts, not anger, to show our support for the people of the Mi’kmaq Nation,” Ms. Nunn said.

When asked what people could do to help if they wanted to support the cause, the group agreed that informing oneself and others is the best thing anyone can do.

“Spread the word, and go out and tell people to find out what’s happening to Native people,” Mr. Carney said.

“It’s about government and business, power and greed working together to take what they want, when they want. It’s not right, and most people when they know what’s going on would agree with that,” Neil Chaske said.

Mr. Chaske, originally from Manitoba, is part of the Sioux Valley Dakota Nation. He has lived in Orleans, Vermont for the past two years.