HOLLAND — With straw bale walls, enclosed in a lime, clay, straw plaster that was mixed on site, it’s not exactly what comes to mind when you think of a senior living facility.

As interest in alternative building methods increases, and the stereotypes that surround Earth-based construction break down, the straw bale structure sitting in Holland, Vermont, is pioneering its way into the future. It is the only straw bale senior living home in the United States. 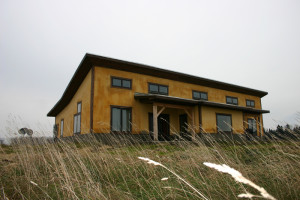 A little over two months after welcoming in its first residents, the building is gearing up for its first heating season. With heavy winds common at the location, and freezing temperatures on the horizon across the area, the 1900 square foot structure is well equipped to face whatever challenges winter has in store.

The building is a fortress of thermal insulation. The wall structure of the post and beam frame consists of 18 inch wide straw bales. The bales, which sit on a two-foot-high pony wall that forms a base to keep them off the foundation, have an R-value insulation rating of 28. The pony wall is stuffed with super insulated cellulose, with an R-value of 55. The roof also incorporates super insulated cellulose material, and the frost-protected concrete slab that the structure sits on is insulated from underneath, as well as along the sides.

Radiant heat lines run throughout the concrete slab and heat the building. An extremely efficient propane-fired condensing broiler provides a continuous loop of hot water through the lines, allowing a consistent temperature to be easily maintained. 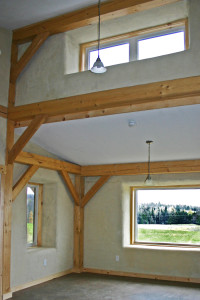 The building consists of two 600 square foot single bedroom senior housing units, with a communal space between them. There is an entry porch, as well as two south-facing porches for each unit. Since it is an independent living facility, the communal space houses an energy efficient washer and drier, which residents share.

Energy efficiency is a theme throughout the house. Currently, the home is set to become the first straw bale building to be awarded certification from Efficiency Vermont as a Vermont Energy Star Home.

The project, managed by Rural Edge, along with general contractor Lee Cooper of Back 2 Basics Builders, began last spring. The frame and roof were up by fall, then wrapped for the winter to keep it dry. The straw bale walls went up in the spring of this year, with everything finished by September.

Evelyn Page, who is now deceased, was one of the oldest living residents in the area. When her husband passed away, she wanted to leave a legacy, so she donated 7 acres, and funded the project. Her only request was that it provide housing for local residents of Holland. Unfortunately, she did not survive to see the finished home, but she did get to see the walls going up.

So, what are the drawbacks to building with straw bales? Uncontrolled moisture is the biggest challenge straw bale structures face. The architects who worked on the project had to reduce exposure to wind-driven rain and snow. The problem was addressed with extensive roof overhangs designed to move water away from the plaster and stucco walls.

This winter will be the ultimate test of the building. So far residents are comfortable and enjoying the opportunity to be a part of such a unique project. 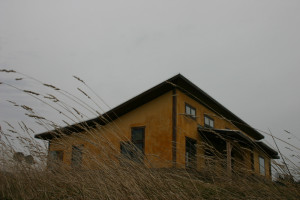