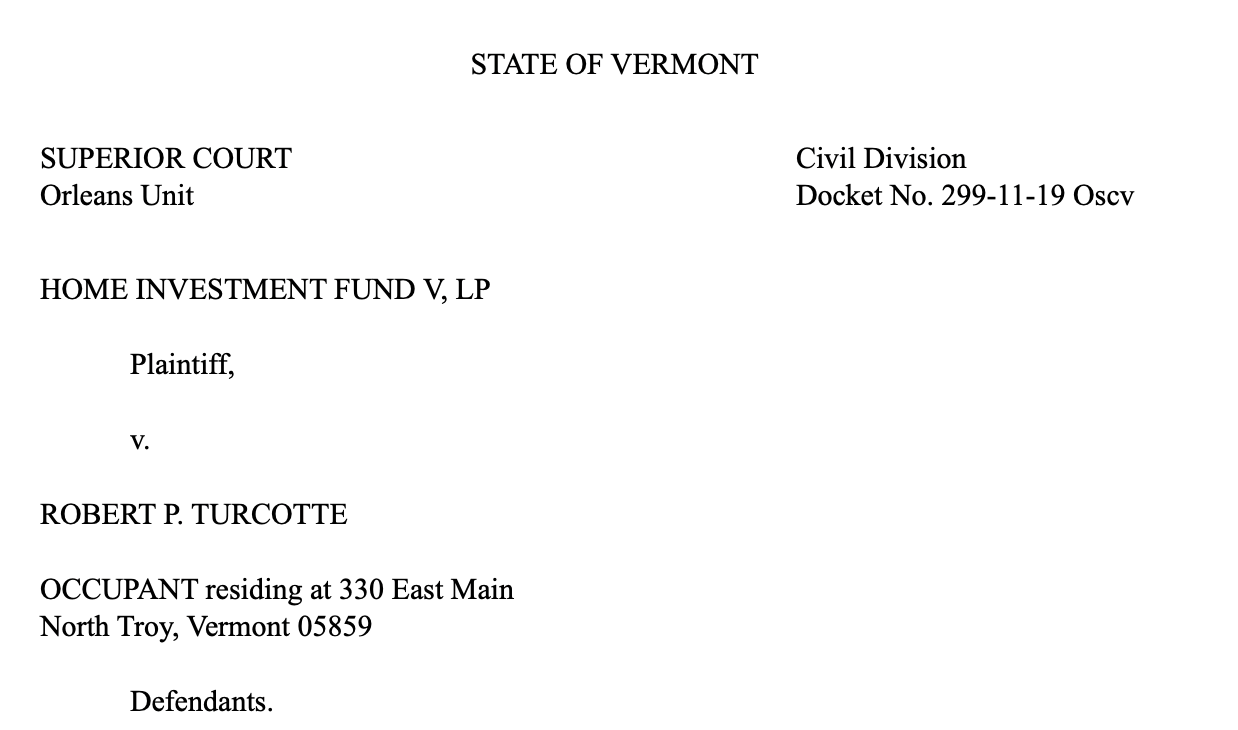 According to the terms and conditions of the Judgment and Decree of Foreclosure by Judicial Sale (the “Order”) in the matter of Home Investment Fund V, LP v. Robert P. Turcotte, et al., Vermont Superior Court, Orleans Unit, Civil Division, 299-11-19 Oscv, foreclosing one mortgage given by Robert P. Turcotte, to CitiFinancial, Inc., dated July 07, 2009 and recorded in Book 71, Page 186 of the city/town of Troy Clerk’s Office Land Records, presently held by the Plaintiff, Home Investment Fund V, LP via Assignment of Mortgage Agreement August 27, 2019 respectively, the real estate with an address of 330 East Main, North Troy, VT 05859 will be sold at public auction at 11:00 am on January 14, 2021 at the location of the Property.

Property Description. The Property to be sold is all and the same land and premises described in the Mortgage, and further described as follows:

Being all the same lands and premises conveyed to Robert P. Turcotte and Kathleen Turcotte by Warranty Deed of Clifford L. Dillon, Jr. and Pamela H. Young dated May 11, 1990 and recorded at Book 49, Page 533 of the Town of Troy Land Records. The interest of Kathleen Turcotte was conveyed to Robert P. Turcotte by Quitclaim Deed dated July 10, 2000 and recorded at Volume 59, Page 521 of the Troy Land Records.

PARCEL A:
Being all the same land premises as were conveyed to Beverly C. Caples and Edward E. Caples (now deceased), as husband and wife by Merton A Phillips and Elva Phillips by Warranty deed dated January 17, 1953 and recorded in Book 33 at Page 94 of the Land Records of the Town of Troy; said land and premises being described as follows:

Being the house and the land on east Main Street in the Village of North Troy known as the W.H. Burnap home place described in a Warranty Deed from Alex LePage to Ada Phillips dated March 14, 1932 and recorded in Book 27 at Page 140 of the Troy Land Records and being all the same land and premises as were conveyed to Merton A Phillips by E.J. Smith, Judge of Orleans Probate Court in a Decree of Distribution dated June 15, 1936 and recorded in Book 28 at Page 568 of said Troy Land Records.

Excepting, however, so much of said premises as were deed by Merton and Elva Phillips to Amos Frost by Warranty Deed dated August 3, 1946 and recorded in Book 31 at Page 229 of said Land Records.
PARCEL B:

Being a parcel of Land which is all and the same as conveyed to Beverly C. Caples by Raymond C Nutting and Ruth A. Nutting by Warranty Deed dated October 20, 1971 and recorded in Book 37 at Page 468 of the Land Records of the Town of Troy; said parcel of land being described in the said deed as follows:

Being a parcel of land which is part of the same land premises as deeded to the said Raymond C Nutting and Ruth A. Nutting by Mildred F. Chandler and Charles Chandler by Warranty Deed dated November 20, 1969 and recorded in Book 37 at Page 235 of the Land Records of the Town of Troy. The said parcel of land hereby conveyed being more particularly described follows in the Town of Troy.

Reference is here made to the above-mentioned deeds and the records thereof and to all prior deeds and their records for a more particular description of the lands and premises herein conveyed.

Terms of Sale. The Property shall be sold “AS IS WHERE IS”, to the highest bidder for cash or wire funds only. The sale of the Property is subject to confirmation by the Vermont Superior Court, Civil Division, Orleans Unit. The Property is sold subject to unpaid taxes, municipal assessments, and superior liens, if any.

The public sale may be adjourned one or more times for a total time not exceeding 30 days, without further court order, and without publication or service of a new notice of sale, by announcement of the new sale date to those present at each adjournment or by posting notice of the adjournment in a conspicuous place at the location of the sale.

Mortgage Property Deposit. $10,000.00 to be paid in cash or by certified check by the purchaser at the time of auction, with the balance due at closing. The balance of the purchase price for the Property shall be due and payable within the latter of 10 days from the date of confirmation of said sale by the Vermont Superior Court, Civil Division, Orleans Unit, or 45 days from the date of public auction. If the balance of the purchase price is not paid within the period set forth herein, the deposit shall be forfeited and shall be retained by the Plaintiff herein as agreed liquidation damages and the Property may be offered to the next highest bidder still interested in the Property.

The mortgagor is entitled to redeem the Property at any time prior to the sale by paying the full amount due under the mortgage, including the costs and expenses of the sale.