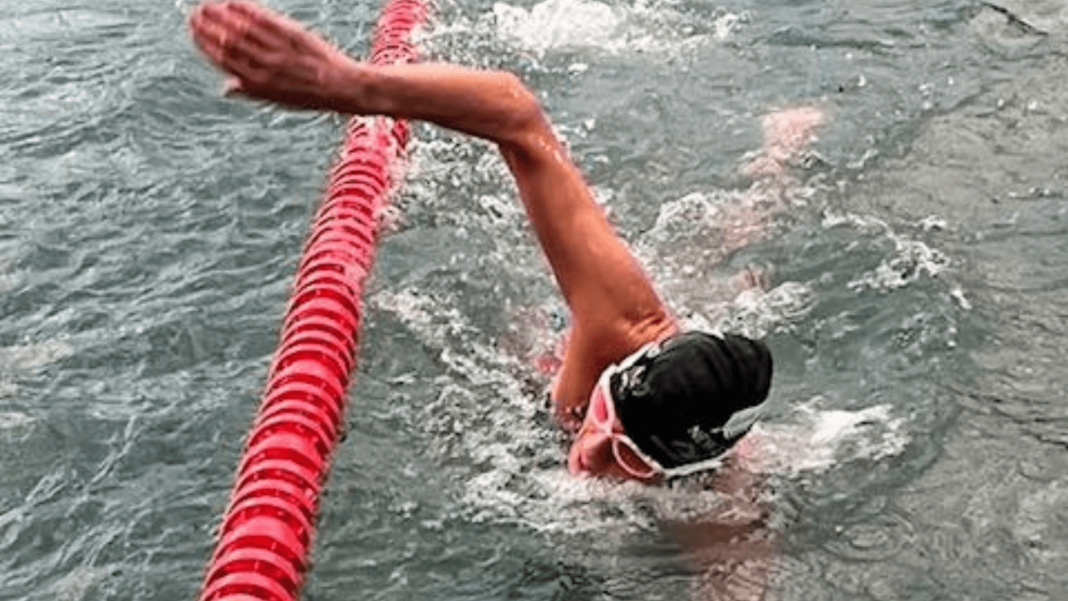 In doing so she set two world records in her age group.

In the 250-Meter Freestyle she finished in 3:38:99, setting another World Record in her age group.

She also claimed a Gold Medal for her age group in the 1,000 Meter Freestyle, finishing in 16 minutes and 50 seconds.

Ice Swimming has seen tremendous growth in recent years and last week an elite group of 475 athletes gathered from around the world representing 41 countries to compete in the 5th World Ice Swimming Championships in Samoens, France.

They were held in a 10-lane, 25-meter pool constructed in an Alpine Lake.

nternational ice swimming association rules do not permit wetsuits, or other heat retaining clothing and swimmers are required to swim in only a standard bathing suit, and swim cap.

She is Executive Director of The Swimming Hole in Stowe, Vermont.

She also serves as Assistant Director at Kingdom Games.

Bynn has been swimming at Kingdom Games events since the first Kingdom Swim in 2009.

Two years ago she moved to the Bluffs in Newport, and started a series of highly acclaimed Swim Tech Camps and Clinics which are held on Lake Memphremagog.

She helped found the Memphremagog Winter Swim Festival in 2015.

The Festival has grown from 41 the first year to an expected 180 winter swimmers this year.

Lake Memphremagog has become her training venue for open water swimming, while Lake Willoughby is her regular “go to” for winter swim training as other lakes in the area freeze over.

During the summer, she has swum the length of Willoughby over 17 times.

They, along with Brynn, are all regular winter swimmers at the Memphremagog Winter Swimming Festival on Lake Memphremagog on the last weekend of February.

Brynn, Demeo, and Manning are all on the Organizing Committee of the Festival.