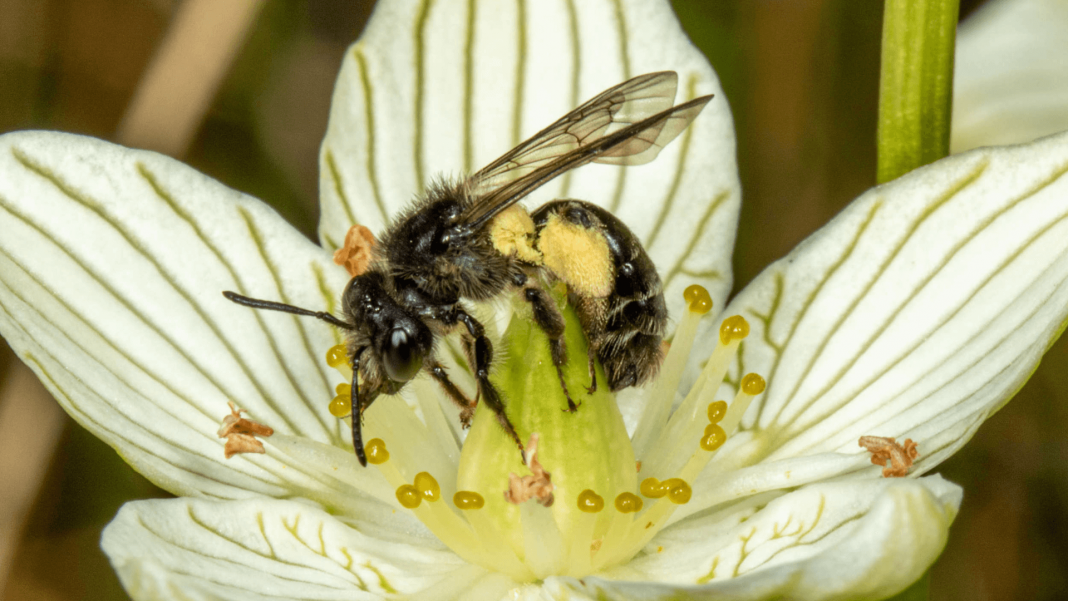 The report provides the first comprehensive assessment of Vermont’s bees.

The Vermont State of Bees report, released today by biologists working on VCE’s Vermont Atlas of Life, was created using more than 55,000 observations of bees from hundreds of community scientists and biologists across the state.

“Many people are enthusiastic about helping to save bees,” said lead author Spencer Hardy. “Our work is now shedding light on which species are in urgent need of conservation action and how we might begin to help their populations.”

The team created a watchlist of 55 of the state’s most imperiled species based on their restricted ranges, changes in abundance, and the threats they face.

These 55 species should be prioritized for conservation work, as they are the most likely to disappear from the state without targeted intervention.

“The important role that pollinators, particularly bees, play in Vermont’s ecology and economy has become better recognized by the public in recent years,” said VFWD biologist Mark Ferguson. “This report identifies our more vulnerable bee species and can be the catalyst for developing management strategies to ensure populations remain robust and viable.”

Using sophisticated computer modeling techniques, the scientists identified 12 Important Bee Areas, the conservation of which is critical to protecting some of Vermont’s most vulnerable bees and valuable bee habitats.

Each Important Bee Area meets at least one of several criteria. They may have several specialist bees, regionally rare species, or contain bee habitat that is rare regionally or in Vermont.

One such group of particular importance is the so-called specialist bees, species that only visit a single species or closely related group of flowers.

Roughly 25 percent of Vermont’s 352 bee species are considered specialists, and declines in these species are of particular concern.

“The specialists are the picky eaters in the family,” said Hardy. “This can make them vulnerable to environmental stressors. However, it also provides an excellent conservation opportunity since many specialists have an uncanny ability to find new populations of their favorite flowers, which we can provide.”

Wild bees play a pivotal role in pollinating both wild and crop plants, a critical ecosystem service many people take for granted.

The report highlights that native, wild bee species were recorded visiting 438 plant species in Vermont during the Wild Bee Survey.

While the domestic Western Honey Bee is important to agriculture and the economy, it can be a source of pathogen spillover to wild bee populations and compete for resources that wild bees need to survive.

Among the 350 species included in the report, 65 were only documented for the first time within the last four years during the Vermont Wild Bee Survey.

“The mountain of bee observations from community members, historical museum specimens, and targeted surveys cover the state remarkably well, and our findings suggest we’ve documented most bee species in Vermont,” said co-author Michael Hallworth. “However, a few species may have eluded our efforts and possibly occur in the state.”

The survey has compiled some of the most likely candidates into a “most wanted” list to help guide motivated community scientists in a quest to find more species.

“Thanks to the efforts of hundreds of people, we’ve learned an incredible amount about the status of wild bees in Vermont,” said Kent McFarland, a co-author and director of the Vermont Atlas of Life. “But it will take strong collaborations between biologists, public agencies, conservation organizations, land owners, land managers, and even beekeepers for us to conserve Vermont’s diverse wild bee fauna effectively now and for future generations.”