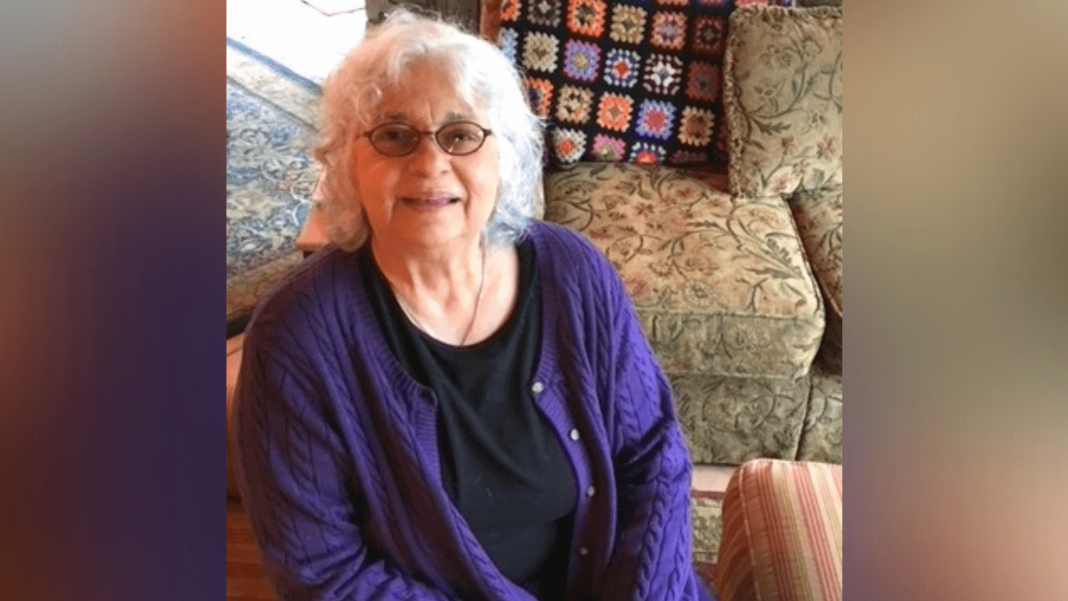 Story and photo by Patty Oliver-Smith

A native of Brooklyn, New York, poet and author Peggy Sapphire has lived in Craftsbury Vermont, since 2000 in a house she and her husband Bob designed and built together on land they purchased years earlier.

Their home is several miles out of town and set back, out of sight from the road where it is surrounded by native trees and plants.

Inside, the rooms are filled with warmth and simple comforts, treasured artifacts, paintings and photographs on the walls.

From almost every window there is a view of the woods, gardens and lawn, a perfect setting for a writer to work on her art.

Peggy is the author of two poetry collections, numerous published poems and short stories. She was also Editor of the Connecticut Poetry Review and has won several literary awards.

Peggy Sapphire speaks about how she discovered “writing as salvation.”

She remembers how expressing herself in words on a page soothed her during difficult times when she was a child.

Reading and writing became her way of dealing with periods of loss and grief that followed from disruptions due to illness and her family’s frequent relocations.

During her childhood in the late 1940s and early 50s, Peggy’s father worked as an organizer of union workers, a dangerous profession, which sometimes meant his leaving home for months at a time.

There were also times when the whole family would have to leave suddenly.

Peggy, as a young child, didn’t understand forbidden topics she was warned not to mention to her schoolmates and the overall need for secrecy her parents insisted upon.

Her mother explained that J. Edgar Hoover’s agents would knock, without warning, on their door searching for her father.

Peggy remembers being in the car writing a letter to her dearest friend as they drove away in a rush from their home in Miami, FL to New York.

There had been no time to say goodbye to each other. That first farewell letter would launch a cherished life-long practice of letter writing that would also be a way of speaking to directly to a reader – as a poet does with her poems.

When Peggy was 9 years old, she suffered from rheumatic fever and spent more than a year confined to her bed. The only treatment in those days was massive doses of aspirin, which left her weak and subject to frequent infections.

She remembers her father, who loved music and literature, bringing her books to read when she was bedridden.

Fairy tales and folk tales from all over the world were her favorites. She and her father listened to music on the radio and talked together about humanity, social justice and the environment.

“He stoked my conscience,” she says with his ideas and feelings that would later be expressed in her poetry and short stories.

When Peggy was 16, her family had to leave the country abruptly because of threats from the FBI related to her father’s work.

They lived for over a year in Costa Rica where she knew no one and, at first, didn’t speak Spanish.

It was then that writing letters to friends from home became a way to “save the words” that expressed her feelings of loneliness and isolation. Writing helped her to navigate the unknown pieces of her childhood.

After finishing high school in Costa Rica, Peggy and her family were able to return home to New York in time for her to begin her college career at Queens College, CUNY.

From there, as so often happens, her life took off on its own trajectory.

She left college short of graduation by a single semester, married young, had two daughters, finally completed her remaining semester and eventually became a teacher.

She went on to graduate school to begin her career as an elementary and secondary school counselor.

Like many women of her generation, all her attention and energy had been consumed by family and work, but by the 1970s she had begun to read “by happenstance” the poetry of Sylvia Plath, Ann Sexton, Adrienne Rich, Jane Kenyon and others whose work embodied the honesty, understanding and shared experience she had been seeking.

She discovered a community of women writers through the IWWG (International Women’s Writing Guild) and learned through their support, which included a year’s fellowship award, to take risks with her poetry, to put her experiences as a woman out there, “to get down to the bones of my feelings.”

These days Peggy continues to write poems and prose pieces, still inspired by history, social justice, and by listening to what is going on in the world.

“When I hear or see something during the day, and it sticks with me, I know it has staying power and will remain to be expressed as soon as I finally have time to myself. I work on articulating it in words, in poetry or prose. I have learned to keep a blank book with me to write in at all times.”

She still draws from the conversations she had with her parents when she was very young about humanity, social justice and love of the arts.

“When I write, I am moved by what’s going on in the world that impacts our lives…I want to expose the hard edges of the world I live in and how it affects my life.”

Peggy Sapphire’s two poetry collections, A Possible Explanation and In The End A Circle can be purchased at MAC Center for the Arts on Main Street in Newport.