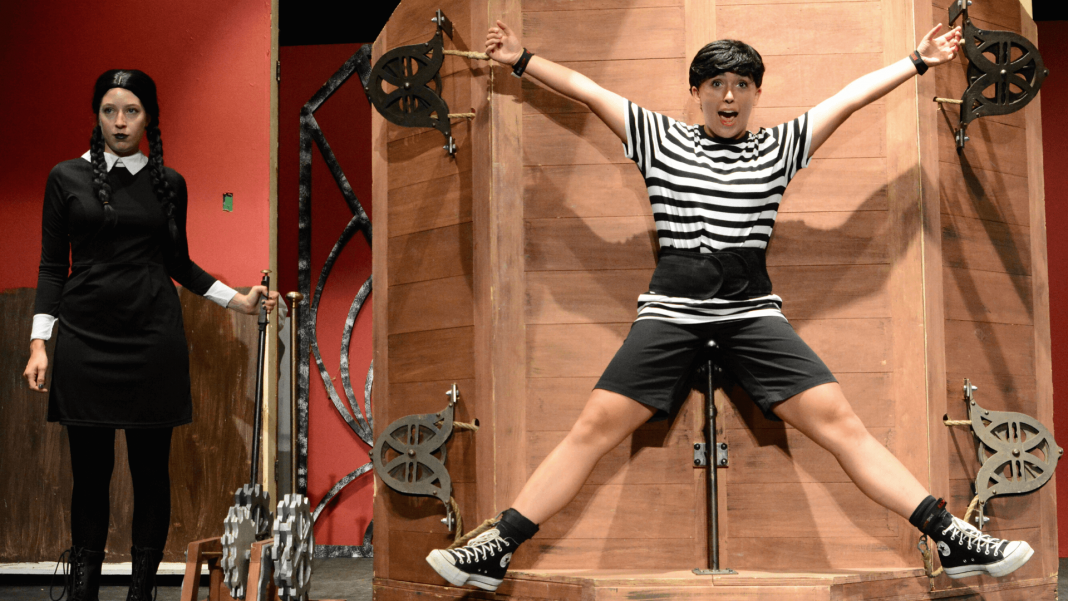 Featuring a cast and crew from both Vermont and Canada, this Borderline Players production was originally scheduled for 2020 but was postponed due to pandemic restrictions.

“This show has been two years in the making and everyone is very excited to be on stage again,” said the production’s director Sarah Comtois, who was last seen on the Haskell stage in Mamma Mia. “It’s a lot of fun and full of laughs. The cast and crew have been working so hard and can’t wait to perform for a live audience.”

For the Addams, to be sad is to be happy, to feel pain is to feel joy. Nonetheless, this quirky family still has to deal with many of the same challenges faced by any other family, and the spookiest nightmare faced by every family: the Addams kids are growing up.

Gomez and Morticia’s dark, macabre daughter Wednesday is now a young woman who has fallen for Lucas Beineke, a sweet, smart boy from a normal, respectable family! In one fateful, hilarious night, secrets are disclosed, relationships are tested, and the Addams family must face up to the one horrible thing they’ve managed to avoid: change.

The performances will include the live band led by the show’s musical director Tori Young on keyboards, with Gideon Yellin, guitar; Lloyd White, bass; and Alex Lepanto, drums.

Tickets are $15 for adults, and $12 for students and seniors and are available at the MAC Center for the Arts in Newport, the Haskell Free Library, and the Colby-Curtis Museum in Stanstead.

Tickets are also available online (U.S. funds only) at https://borderlineplayers.org.

Tickets can be purchased at the door on the day of the performance.

Reserve in advance by contacting Borderline Players via email [email protected] or Facebook.

Please note that masks are mandatory for audience members for all performances.

Note also that there are new requirements for entering the Opera House.

American spectators may enter by the main Opera House entrance on Caswell Avenue.

Canadian audience members should park on the Canadian side and enter the opera house using the fire escape tower at the north end of the building.

After the performance, they must return to Canada the same way.

Canadians with mobility issues who require the elevator should report to U.S. Customs and enter from the American side of the building.

They will need to report to Canada Customs upon their return to Canada.

Visitors should also note that access to the Rte 5/143 port of entry is blocked after 8:00 p.m.