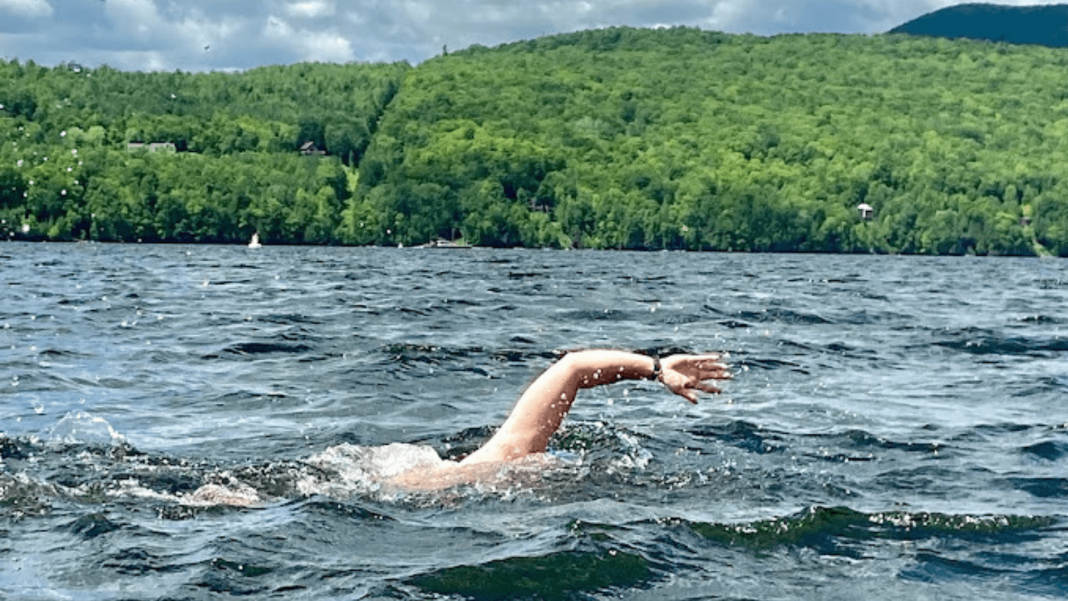 On Sunday, they swam from The Clubhous, in Derby, out and around Bell Island, and past the southern tip of Province Island, then north along the western shore into Canada.

Morrison and Brynn completed the 6.5-mile swim back to The Clubhous.

Delneo, caught a ride back after swimming in Canada for half a mile and completing 4 miles total.

They were supported by Kathleene Marcil and Pam Ladds in kayaks and Phil White, piloting a pontoon boat.

Water temperature in Lake Memphremagog during the swim were 58 F to 60 F.

White caps signaled wind speeds of up to 15 mph with gusts of 20 mph from the WSW and WNW.

Several weeks ago, Canada Border Services Agency informed swim organizers that the border had re-opened to allow swimmers and boaters who did not touch Canadian boats or Canadian soil to pass freely.

Charlotte Brynn, Executive Director at the Swimming Hole in Stowe has recently purchased a house on the Bluffs in Newport.

Over the past 12 years, she has become an accomplished ultra-marathon swimmer.

She has swum the 25-mile length of Lake Memphremagog twice and set a record for the fastest 32-mile crossing of Lake George.

She runs BrynnSwim with coaching and technical open water clinics on Lake Memphremagog.

Morrison and Delneo have recently moved to Montpelier, from San Francisco, CA.

Delneo has taken on the job of Vermont State Librarian.

Morrison is one of the founders of Marathon Swimmers Forum and its LongSwims Data Base.

He has completed numerous, challenging ultra-marathon swims and was recently inducted into the International Marathon Swimmers Hall of Fame as a 2022 Honor Administrator.