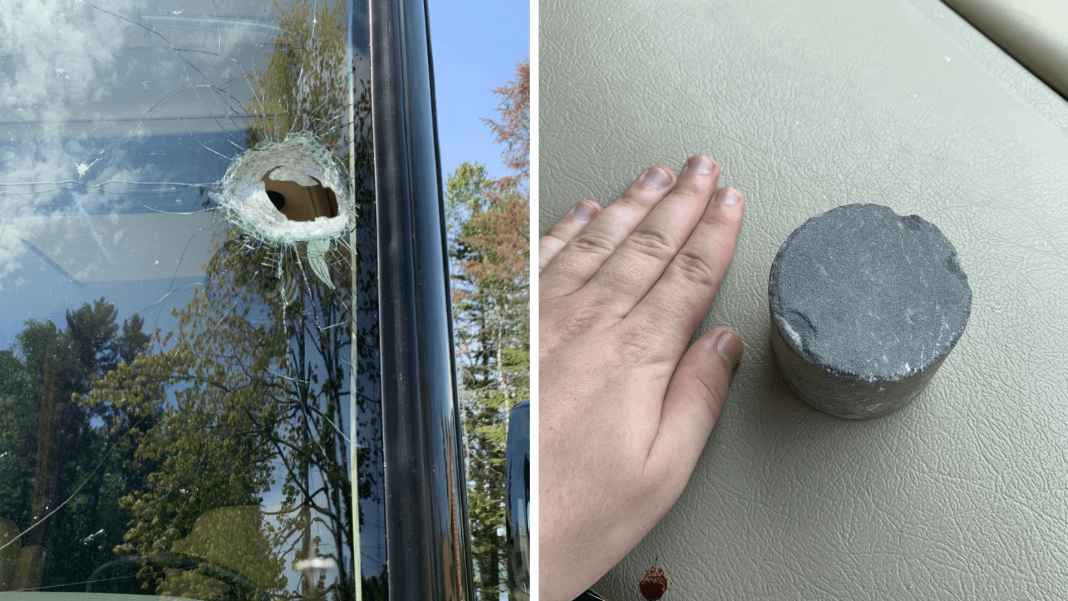 Note: Contact the victim at an email he set up for the reward, at: [email protected]

LOWELL — An Ohio man visiting the Northeast Kingdom is offering a monetary reward of $1,000 for information leading to the identification and arrest of two men who threw a large object at his windshield, injuring him in the process.

At around 9:45 a.m. on Memorial Day, the victim was traveling north on Route 100, about 2 miles south of Lowell, when he noticed a red/orange pickup truck with the front passenger trying to get his attention.

He pulled over thinking something was wrong with his RV, and after stopping and opening the door, the suspect said that something had flown off the RV, and nearly hit the pickup truck.

The victim told police that his wife had been following behind the RV in a separate vehicle, and she reported that she had not seen anything like what they described, and something seemed off.

The victim became suspicious of the other man’s motives, and drove away, turning right onto Route 58.

The red truck continued to follow the victim and his wife, again pulling up next to him and shouting. At this point the victim phoned 911.

The red truck pulled ahead and stopped in the middle of the travel lane blocking the RV.

He attempted to pull around him but the passenger ran into the other lane to block it, so he stopped.

The suspect approached the RV and continued to shout at the victim. The suspect moved with a very distinctive limp, police say.

At this time the victim noted that the pickup truck did have a crack in its windshield, running horizontally across the middle.

While on the phone with the police, the truck sped off down the road.

The victim drove about a mile down the road when he noticed the red truck coming back, heading towards him on Route 58.

The passenger in the truck was hanging out of the front passenger window when he heaved something at the RV as they were passing.

The object came through the windshield, spraying glass everywhere, including on the victim.

The projectile nearly hit him in the face and head.

The victim suffered 4 superficial wounds on his face and neck, and blood was running down his face when police arrived. He was checked by emergency responders at the scene.

A be-on-the-lookout for the vehicle was issued by police, but they were unable to locate the truck.

Police say one of the suspects had long hair in a ponytail, and one was heavyset with a beard and wearing a woodland camouflage shirt.

The suspects were traveling in an older pickup truck, described as reddish/orange, and had a tan and white Irish setter in the vehicle with them.

The weapon used is believed to be a cement item or plug which may possibly be used by masonry or cement workers.

The suspects were last seen traveling west on VT-58, fleeing the scene.

Anyone with information regarding the identity of the suspects is asked to contact the VSP Derby Barracks at 802-334-8881.

If you have information regarding the truck or the suspects, be sure to also contact the victim at an email he set up for the reward, at: [email protected]

He is offering $1,000 if you come forward with this information, and you can choose to remain anonymous.