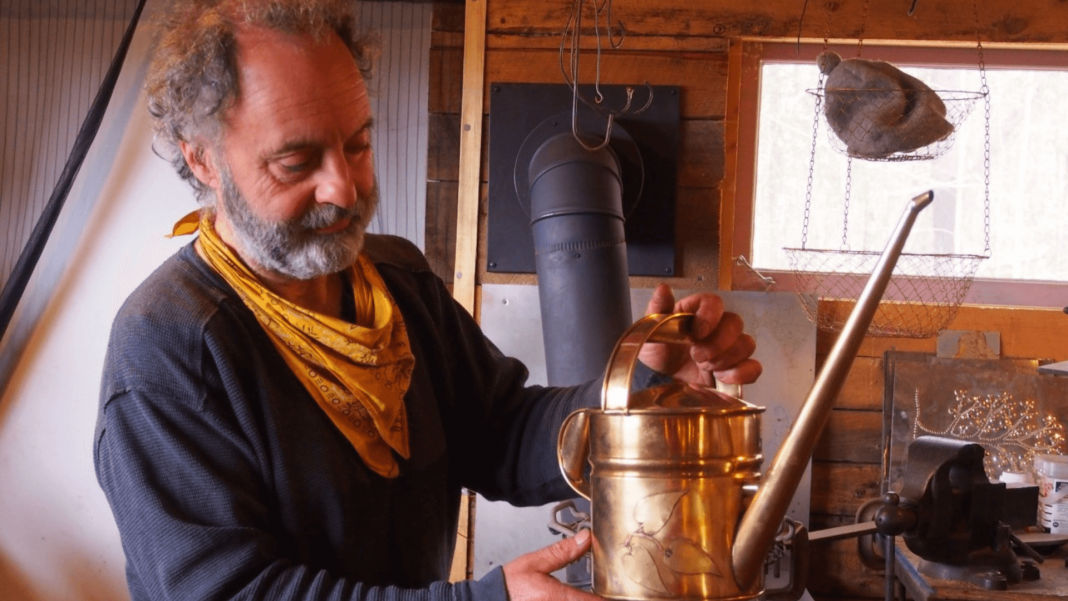 Story and photos by Bill Peck.

NEWPORT — It is a bit of a drive up to his house which is perched on a hillside with a free view of Jay Peak and the northern range of the Green Mountains.

The house, in Barton, is itself modest in appearance, with large plate-glass windows looking over the landscape to the west. Surrounding it are small, rock-ringed vegetable, herb, and flower pots.

Nearby stands a large well-stocked woodshed. Around the corner is the shop…his shop…the place where his “soul-loving-passion” finds release.

Fashioned from a neglected old garage and a large adjacent cellar, it has a rough-hewn almost subterranean feel about it.

One enters through an unpretentious doorway…and immediately stops short, stunned.

Stunned by the crowded, enormous array of ancient-appearing machinery, heavy cast iron and steel, knobs and levers, rollers and presses, blades and punches.

Massive, well-oiled, and fully functional, they are for burring, cutting, beading, folding, and rolling sheet metal.

The walls and tables are festooned with all manner of hammers, mallets, files, and cutting, soldering, and welding implements.

One sees anvils too numerous to count. This is the special realm, the domain of Ramsey Pualwan, tinsmith, who is May’s MAC Artist of the Month.

Ramsey came to his craft late in his teenage years when, in need of a summer job, he found himself working in the tinsmith and broom-making display areas at Old Sturbridge Village, a historical re-enactment museum in Massachusetts. 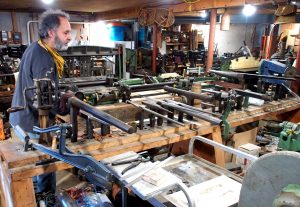 Dressed in colonial garb, under the tutelage of his fondly remembered mentor, Al Lees, he soon abandoned brooms and learned the basics of shaping tinplate.

He worked at Sturbridge for eleven years. The die had been cast.

Over the years that followed, Ramsey cycled through a variety of day jobs and came some thirty years ago to Vermont.

For a while, he was a fitness director/personal trainer at a Montpelier gym and coached the cross country running team at Norwich University for a number of years.

Ramsey also brought his skills to a number of craft schools and workshops in New England and in Vermont.

But all the while he felt deeply drawn to the craft of the tinsmith, and over the ensuing decades acquired all of the antique machinery and arcane knowledge necessary for furthering his passion.

He is able to incorporate turned wood, glass, and polished granite into some of his pieces.

How the brutal-appearing machines, the hammering, and the rending of metals can produce the graceful copper watering cans, the elegant brass wall sconces, the gleaming brass lanterns, and the decorative, hinged jewelry boxes is a wonder.

All of Ramsey Pualwan’s wonderful work can be appreciated and purchased at the MAC Center for the Arts on Main Street in Newport.