My name is Erynn Hazlett Whitney and I am running for Governor of Vermont as an Independent. I am a 33-year-old woman, mom, wife, Soldier, entrepreneur, professional, warrior, and a 7th generation Vermont worker.

Please take a moment to read why I am asking for your support and vote to become the 83rd Governor of Vermont.

I have 11 years of experience in the Vermont Army National Guard and have recruited and trained Soldiers for the dual mission deployment in 2021.

Alongside other great and experienced warriors, I deployed to Afghanistan in 2010 and understand first hand the major physical and emotional toll the absence of a family member has in Vermont homes and communities.

Soldiers going to fight for our State and Country need a leader who can command them through the unique challenges of these deployments and inspire their families in their absence.

I am the only Governor candidate with the experience needed to oversee these deployments while advocating in the best interest of the mission, Soldier, and family.

Voting for me shows the Service Members of Vermont that Vermonters cares about their wellbeing and want their missions to be successful.

In my time of service, I also experienced the weaknesses of our States Armed Services. My military career ran parallel to the career of Phil Scott’s rise to Governor.

During my career, I initiated and served through multiple investigations into the unethical command and the misconduct within the Armed Forces of Vermont, but he hasn’t.

Governor Scott has yet to consider the wellbeing of Soldiers a priority to his high position and has proven his inability to advocate for the most vulnerable members of the Armed Forces by neglecting the passage of H.401.

While farmers make some of the best Soldiers in Vermont, David Zuckerman does not have the warrior mentality of a Soldier.

He does not have the awareness of the critical strengths and weaknesses this deployment will bring to the Vermont National Guard and this awareness comes from experience, not briefings.

They deserve a Commander with knowledge, experience, and success in peace AND war. A vote for me is a vote for the Service Members of Vermont and they need your support.

The silver linings of any depression highlight the opportunities for a great leader to inspire and bring people through the darkness to success and opportunity.

Never before has Vermonts’ creative economy, land economy, and individual well being aligned perfectly for profit.

Positioning local Vermonters and property owners in economic power will ensure the legislator responds to the needs of Vermonters and not the tax rate of second homeowners.

Property tax cuts and credits for Vermont landowners through homestead declaration and occupation, cannabis taxation, cultivation, and reparations, and lowering environmental regulations to begin motored trail development and registration is the future for Vermont economy.

We must give our tourists the privilege to use our land in a way that suits us best, not the other way around.

Never should a homestead tax rate be higher than a non-homestead rate, unless the government is trying to punish its people for living here.

This feeling of punishment, of isolation and of bleak futures is exactly why young people are leaving Vermont- it’s become too hard, expensive, and unprofitable to live here.

Vermont has proven, again and again, it likes being independent and the best. Yet, our election system has been overtaken by the National platform of Democrats and Republicans.

If you vote for a Democrat or a Republican, economically, the future of Vermont will continue to be unfruitful because their values and influences stem from outside Vermont.

Vermont must be led forward without fearful control. Vermont must look back on its history and values and be inspired to reprogram the pulse of Vermont with the progressive uniqueness that led to previous population growths.

What makes Vermont great is it’s “weirdness,” and we need to stop conforming to the National mold dictated by the Democrat and Republican parties and get back to our roots.

Wake up, Vermont, we are on a slippery slope. The best way to get off this mudslide is to elect a leader who isn’t afraid.

Elect a leader who sees the challenges Vermont has ahead and isn’t afraid to command and inspire through them.

Elect me, Erynn Hazlett Whitney, for Governor of Vermont in 2020. 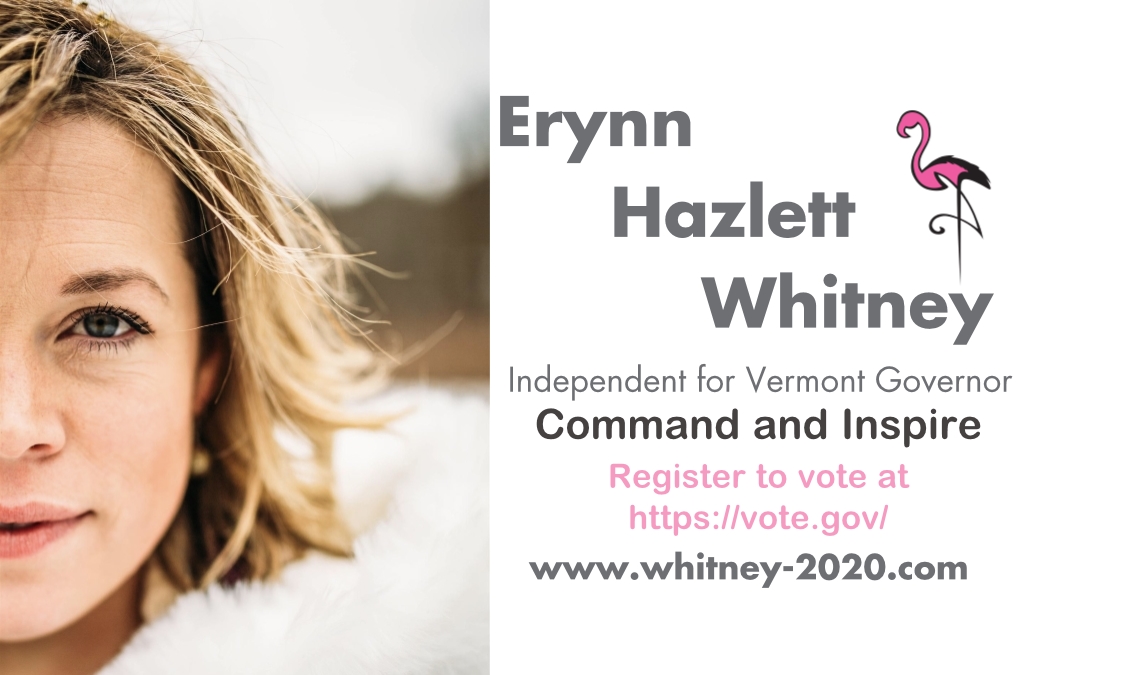 Latest from Letter to the Editor

This letter was submitted by Russ Ingalls Senator, Orleans/Essex District. As many
Mayor Paul Monette recently announced his decision to run for re-election as
The Vermont Agency of Natural Resources hosted a virtual public meeting last
With election day looming some issues rise to the surface during the
This letter was submitted by Peggy Stevens, DUMP Advisory Committee member from
Go to Top