LYNDONVILLE — Lyndon State College’s Electronic Journalism Arts Department has been ranked sixth in an annual nationwide survey in NewsPro magazine. The 2014 poll was distributed on TVWeek.com and to members of the Radio Television Digital News Association (RTDNA), with 673 respondents participating.

According to the NewsPro article, “The Electronic Journalism Arts department at 1,400-student Lyndon State College in Lyndonville, Vt., had a strong showing for the second straight year — and, like the Missouri School, was favored for its in-the-trenches approach to teaching.” Lyndon is one of a handful of colleges in the country that produce and broadcast a daily televised news program staffed entirely by students. 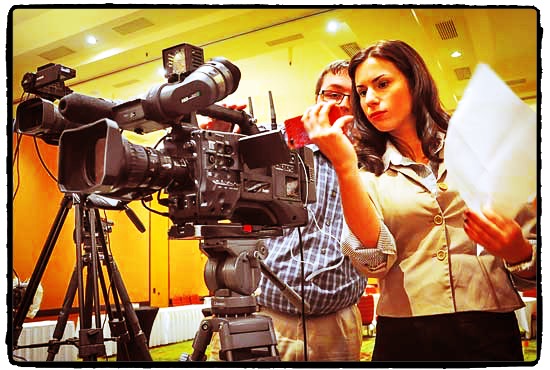 In addition to the News7 telecasts, students in the department produce content for web, mobile, and print-based media. Together, these real world experiences form Lyndon’s Vermont Center for Community Journalism (VCCJ), the capstone activity for the department’s majors. The program has won more than 80 regional and national awards in the last 10 years.

One news professional explained to NewsPro, “Lyndon State College is a small school made up of a very few students in the Broadcast Journalism Department. The students turn out a nightly, live broadcast of local news in the Northeast Kingdom and surrounding towns of Vermont (and New Hampshire). Not only has this journalism program taken home Emmy awards, they consistently turn out an amazing 5:30 broadcast on the backs of only the students!”

A statement from the department’s faculty noted, “The Electronic Journalism Arts department is extremely honored to see Lyndon State College in the top 6 list of leading graduate and undergraduate journalism education programs in the United States. The survey results verify that our graduates leave with the skills and work ethic needed to make a positive impression in the industry.”

College President Joe Bertolino added, “Hats off to all the hard working students, faculty, and staff for making this happen.”