A ghoulish Halloween Hustle through Newport

NEWPORT — Runners showed up on Saturday in their finest Halloween costumes for the 10K, 5K, and 1 mile runs, in this year’s Halloween Hustle.

Participants came to Newport from all over Vermont and New York, as well as Quebec City, Sutton, Waterloo, and Bromont. There was even a strong contingent from Newport Elementary School.

An impromptu costume parade through downtown Newport, led to a quick start at Field Avenue.

11-year-old Matt Moore of Derby, claimed first place overall in the 5K Run with a time of 22:08. He fended off 31-year-old Irfan Sehic of Burlington, by over a minute.

“That kid is fast,” Irfan said as he turned to congratulate Matt at “The Fish,” which was the official finish of the race.

Kimberly Clark of Sutton, running as Frankenstein’s Bride, took home first in the women’s division, with a time of 26:41.

Ryan Moore, Matt’s father, won the 10K with a time of 47:42. Francine Amyot, of Quebec City, running in her Holstein Cow suit, finished first in the woman’s division, with a time of 1:03:25.

Almost half of the runners were age 18 and under, with numerous parent-child combos showing up and running together.

A spontaneous “after party” at Brown Dog Bistro was also a hit. 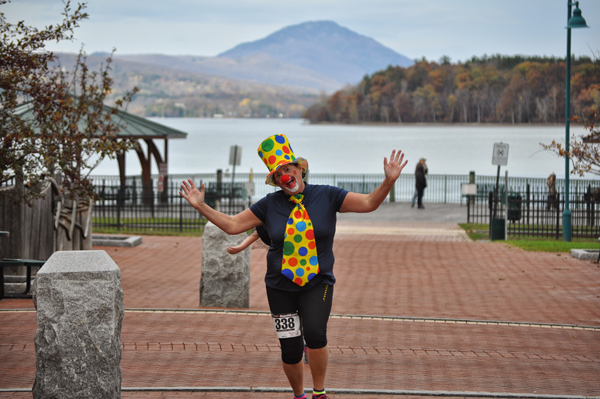 A portion of the proceeds went to support Green Mountain United Way, which also held a 50-50 raffle, won by April Farnham of Plainfield. Twenty percent of the fees from Canadian registrants went to the Fondation Christian Vachon of Magog, QC.

Next year’s Halloween Hustle will be on October 31, 2015. Event organizers are already forming a decorating committee to help spook up the bike path a little to add to the fun.

Next up will be The Santa Run on December 6th, hosted in partnership with Newport Parks and Recreation Department and Newport Live. Kingdom Games is also teaming up with Northpoint Chrysler, Dodge Jeep and Ram, to raise money and gather toys for the local Toys for Kids program. Register on line at www.kingdomgames.co. Fees are $35 for adults, and $15 for kids.

Registration includes a Santa Costume and entry into a great fun run. 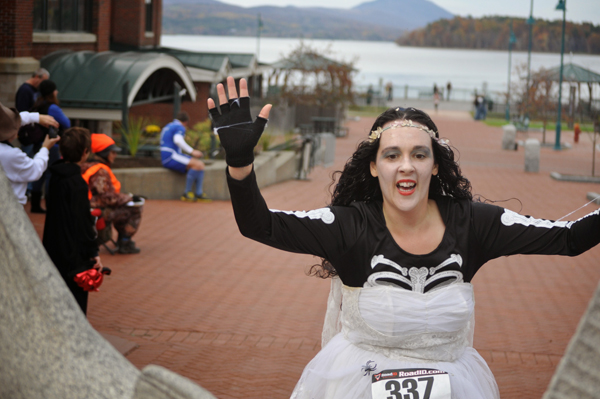