NEWPORT — Local FairPoint workers took to the streets in Newport and Derby this week, after going on strike as of 12:01 a.m., October 17. Workers have gathered holding picket signs outside Orleans County Courthouse in Newport, and along Route 5 in Derby.

A union spokesman said that all members are joining in the strike and none have crossed the picket line.

Starting Friday, about 1,700 workers in Vermont, New Hampshire, and Maine went on strike. The main issues behind the strike are recent benefit cuts and a pension freeze. The union has also filed an unfair labor practice complaint against FairPoint, saying that the company has bargained in bad faith and illegally imposed terms and conditions without having reached impasse.

Talking with protesters who faced the cold and rainy conditions to get their message out throughout the week, most feel that the company wants to turn solid, middle-class jobs into low wage temporary jobs.

“FairPoint CEO, Paul Sunu, gets millions of dollars a year in bonuses, and they want us to take it in the shorts,” a protester in Derby said on Wednesday. “It’s wrong, and it should not be that way.” 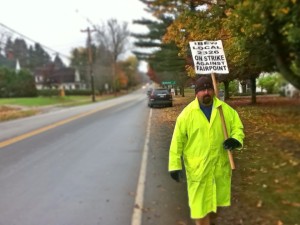 FairPoint recently renewed its employment agreement with Sunu for three years. According to an SEC filing, he receives an annual base salary of $800,000. His target level bonus under the annual incentive plan is 100 percent of the base salary, and is eligible for a maximum bonus of up to 150 percent of his base salary.

Bargaining began on April 25, with the collective bargaining agreements expiring on August 2. In July, union members voted overwhelmingly to authorize a strike if union leaders decided to take that action.

The statement goes on the say:

When FairPoint took over Verizon’s landline business here, they made a lot of promises. They claimed they would bring more jobs to our region. Instead they’ve cut hundreds of jobs.

Chris Recchia, the commissioner of the Vermont Department of Public Service, said he is concerned about the quality of service FairPoint can provide with the company’s employees on strike.

The Vermont Department of Public Service has already sent a letter of concern about service quality to FairPoint before the strike began, and reminded the company that it needed to provide regular updates on service quality.