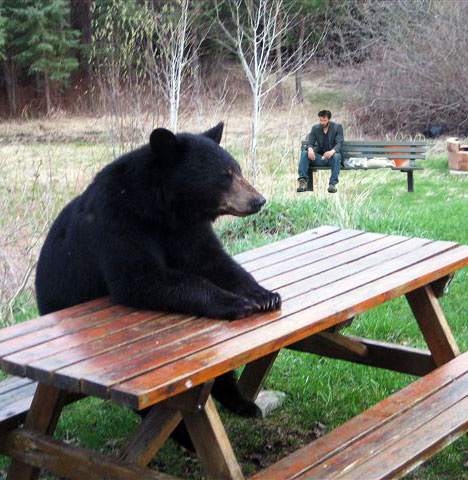 MONTGOMERY — A Montgomery man was charged by the Fish & Wildlife Department for intentionally feeding bears.

Jeffrey Messier, 54, was charged with feeding bears after Game Warden Sgt. Carl Wedin received a report of a bear being killed in self-defense at a neighboring residence on June 22, 2014.

Sgt. Wedin responded and recovered the bear, and the investigation concluded its stomach contained a large number of sunflower seeds.

The investigating warden went to Jeffrey Messier’s residence where he discovered evidence of bear feeding and encountered a bear walking around the residence. The bear showed no sign of being afraid of people and walked right up to the warden. The bear then approached a picnic table where sunflower seeds were placed. It was obvious to the warden that this bear had been intentionally fed on several occasions and had lost its fear of humans.

Further investigation by Sgt. Wedin revealed that several other bears also came to the residence often enough to be named and that many of them in recent years may have been killed or injured in incidents with other landowners.

According to the Vermont Fish &Wildlife Department, black bears are found in most forested portions of Vermont where they rely on wild foods such as berries, cherries, beechnuts, apples and acorns to survive. But the department also points out that bears can easily become attracted to other foods such as birdseed, garbage and pet food.

“Bears are normally shy and not aggressive toward humans,” says bear biologist Forrest Hammond. “However, a bear that has been fed by humans soon loses its shyness and can become dangerous, especially to the landowner feeding the bears and to their neighbors. Often, as in this case, fed bears will seek similar foods elsewhere, and in the process cause property damage and scare people not expecting to find bears on their porches and in their back yards.”

“At this time we are responding to reports throughout the state of bears causing damage while attempting to get at chicken feed, bird seed, stored garbage, and food kept in screened porches. In most cases this does not end well for the bears.”

“People such as Mr. Messier that feed bears often think they are helping them,” said Hammond, “but in reality such behavior causes problems for other landowners and often ends with the death of the bears being fed. When we start receiving multiple reports of bears causing problems in an area we most often find that someone is intentionally feeding them.”

The intentional feeding of bears is illegal in Vermont. If convicted Messier faces a fine of up to $1,000 and a one-year revocation of his hunting, fishing and trapping licenses.