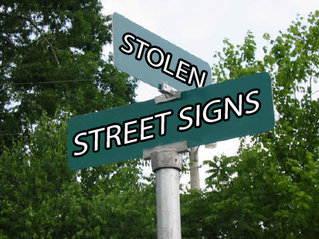 LOWELL — The Vermont State Police are reporting that two street signs in Lowell were stolen, and a third was removed from its location. Sometime between Tuesday and Thursday the signs went missing.

The third sign indicated a narrow bridge ahead, and was removed from its location and discarded in the river located in the same general area.

When street signs are stolen they are often used as decorations, however, sometimes it is done to avoid obeying the law by claiming later the sign was not there.

Usually considered to be a prank by the perpetrators, the theft is often costly and inconvenient for the municipality.

In the United States, each street sign generally costs between $100 and $500 to replace.

Anyone with information pertaining to this theft is encouraged to contact the Vermont State Police, Derby Barracks 802-334-8881.