Man falls from the Pinnacle in Baldwin's Mills - Newport Dispatch 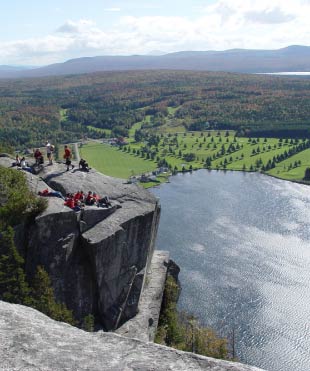 BALDWIN’S MILLS, QC — Authorities in the Eastern Townships of Quebec are confirming that a man, described as being middle aged, fell off of the Pinnacle located in Baldwin’s Mills, over the weekend.

It appears that the fall was considered a “voluntary action,” which would indicate that it may have been a suicide.

The communications officer with the Surété de Quebec, Aurélie Guindon, said earlier in the week that the initial investigation into the incident points toward this possibility.

Because this is the case, there is no more information being given by the SQ, as it is their policy not to issue any public statements or details in cases of possible suicide.

Mount Pinnacle is a popular hiking destination for people in both the Eastern Townships, as well as Vermonters, as it is only about 12 miles from the border at Derby Line. There are easy walking trails to the summit, which overlook Lac Lyster.

HOLLAND — A burglary took place in Holland this week. The incident
NEWPORT — The MAC Center for the Arts in Newport will reopen
DERBY — An 87-year-old woman from Island Pond was injured during a
DERBY — The Vermont State Police recently released a photo from a
NEWPORT — Vermont Student Assistance Corp recently awarded over $1.4 million in
Go to Top