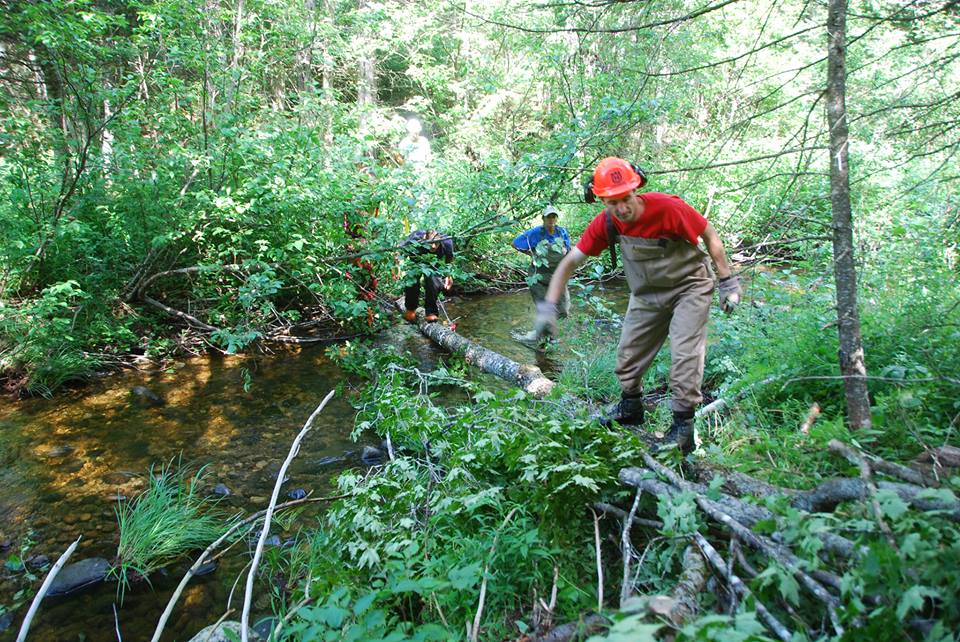 The Vermont Fish & Wildlife Department and Trout Unlimited have partnered to improve trout habitat in the Nulhegan River watershed in Vermont’s Northeast Kingdom.

The team, led by Jud Kratzer, fisheries biologist for the Vermont Fish & Wildlife Department, and Joe Norton, project manager for Trout Unlimited’s Upper Connecticut Home Rivers Initiative, have been updating culverts under roads to improve upstream passage for trout so that they can access spawning habitat and find cooler water in the heat of summer. They have also been strategically felling trees into the river in order to improve trout habitat.

“Good trout habitat is often messy,” said Kratzer. “It’s full of boulders, trees, sticks, and leaves. It may not look like the manicured stream bank that you would find in a city park, but trout thrive in that environment.”

According to Kratzer, historical logging practices around the turn of the twentieth century took a toll on trout habitat in the Nulhegan watershed. In order to ship Vermont logs to mills in southern New England, dams were built, riverbeds were straightened, and large boulders and trees were removed. This drastic alteration in the river proved devastating for trout, and much of the damage still exists today.

The team has replaced two culverts that were barriers to the upstream movement of fish with bridges that now allow fish to move upstream into areas that were previously inaccessible to them.

“In some instances, we are opening up smaller trout streams that have not had access for larger mainstem trout for nearly 50 years,” said Norton.

The team has also strategically added wood to portions of several rivers and streams in the watershed. These strategic wood additions are improving fish habitat by providing places for trout and other fish to hide from predators, retaining food for the aquatic invertebrates that fish eat, and by helping the river to form deeper runs, which trout prefer over shallow riffles.

“We’re all working together to restore the rivers in this watershed so that trout have a place to thrive and reproduce,” said Kratzer. “Past land use practices have left a legacy of poor trout habitat in many of Vermont’s rivers. Our work is one small step towards restoring the former health and beauty of these waters.”