STANSTEAD, QC — The name Cuisine L’abeille, which translates to “The Kitchen Bee,” is one that fits restaurant owner Lucia Sanchez’s story.

Lucia was born in a little village in the Dominican Republic. She learned to cook in what she describes as the “natural” way, by spending time with her family in the kitchen. Her father was a beekeeper, and as a young girl she watched her father working with bees, and learned some valuable lessons in life.

“I learned through my father’s work that bees are hard working, and all that hard work produces something sweet and delicious.”

Sanchez, who has only been in Canada for two years, is now working hard running Cuisine L’abeille by herself. Like the bee, the end result of her hard work is something delicious.

The restaurant is serving up cuisine from Sanchez’s Dominican Republic roots. It is located at 286 Rue Dufferin, just across the border at Route 5 in Derby Line. It is across the street from the Del Monty.

Contrary to popular belief, Dominican food is not spicy. Often, people categorize it with Mexican food, which is wrong. It’s predominantly made up of a combination of Spanish, indigenous Taíno, and African influences. Although not spicy like Mexican food, it is filling.

From my experience, and I am no expert on Dominican food, I would describe it as a warm, comforting food. It’s flavorful rather than spicy, which is something I think would appeal to most people.

I chose the “Dominican Flag,” which is the most popular dish at Cuisine L’abeille. The dish consists of rice, beans, salad, and a chicken or pork stewed meat. I don’t eat pork, so I ordered the chicken. It was a really nice lunch.

Some other choices include soups, omelets, empanadas, and stews.

Sanchez has seen locals warming up to the new restaurant in her first few weeks. She has already established a group of regulars.

“It’s amazing being in Stanstead,” Sanchez said. “The people here are lovely and very welcoming. I’m happy to have opened up in this area.”

She has already had a few customers from Newport. With very few ethnic restaurants in the area on both sides of the border, Cuisine L’Abeille is certainly filling a niche. And the price is right, with the most expensive plate coming in at $10.95 tax included. 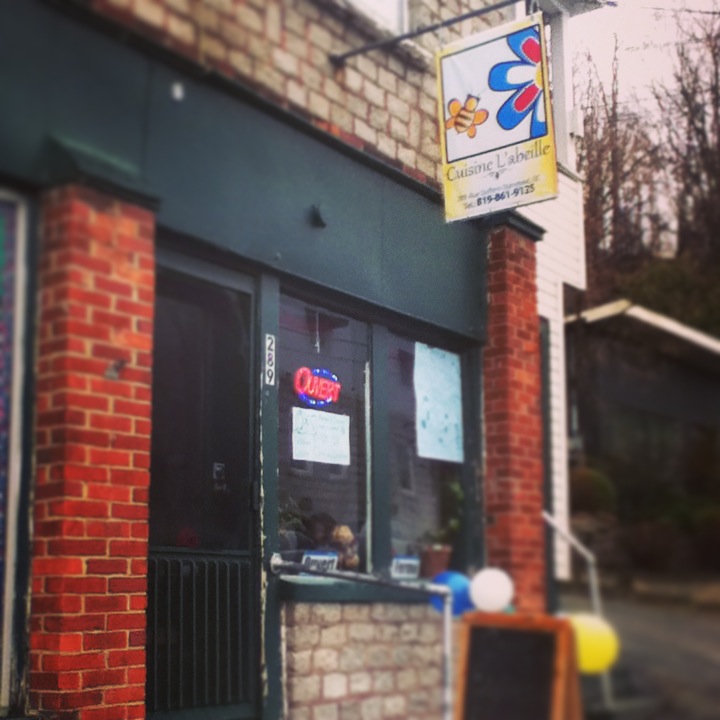 What I liked about my experience at Cuisine L’abeille was the authenticity of the restaurant. It’s a place that reflects not only the Dominican Republic, but Sanchez herself. Her paintings line the walls, and with only ten tables, the atmosphere is small and comfortable. The music playing when I visited was a radio station streaming from the Dominican.

Cuisine L’abeille is also a cafe, so stopping in for a coffee or dessert is another option. They are open Monday through Saturday 11:30 a.m. to 7:30 p.m.

You can visit the restaurant online at their Facebook page. I highly recommend this restaurant, and will be returning soon to try some of the other dishes.