MONTGOMERY — A woman was rescued in Montgomery on Tuesday at around 5:30 p.m., after being stuck in rising flood waters on Longley Bridge Road. Police and a local resident, using a large farm tractor, were able to pull the woman out of her vehicle to safety.

Vermont State Police received the call that a full sized truck was caught in the flood waters.

Franklin County Sheriff’s Office Corporal McKenney was the first law enforcement to arrive on scene. He and nearby resident, Stanley Longley, saw that the truck was still occupied. Realizing the woman inside was sitting in the frigid water and fearing the vehicle may be swept away, Corporal McKenny and Mr. Longley took action.

Mr. Longley obtained his farm tractor from his residence and drove it to the edge of the flood water. Corporal McKenny boarded the tractor and they backed into the water towards the stuck vehicle. Once at the vehicle, Corporal McKenny was able to break a window and pull the woman out of the truck.

McKenny, with the assistance of Enosburg Rescue member Dean Scott, was able to get the woman to the tractor. They then drove all involved to safety.

Members of the Vermont State Police, Franklin County Sheriff’s Office, Enosburg Rescue, and area fire departments responded to the scene. During their response units found direct routes to the stuck vehicle were impassible due to flood waters and heavy mud on the back roads. This drastically increased response times as alternative routes were sought.

At one point a responding ambulance and fire truck were stuck in heavy mud on Longley Bridge Road.

The woman was not seriously injured and was transported to Northwest Medical Center for precautionary purposes. 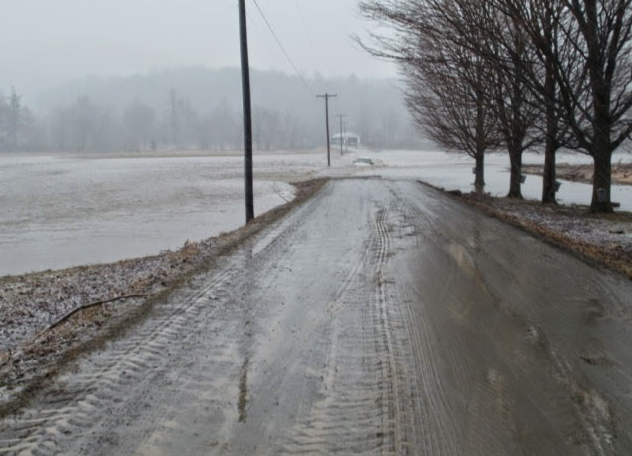