BARTON — Biathlon is a winter sport that combines cross-country skiing and rifle shooting. It originated as an exercise for Norwegian people, and as an alternative training for the military. It is also the only Winter Olympic sport in which the U.S. has never won a medal.

Susan Dunklee, the 27-year-old Olympic athlete from Barton, was close to making history Tuesday night at the 2014 Winter Olympics. She was headed into the final shooting station of the women’s biathlon 10-kilometer pursuit in fifth place.

In an interview after the event with USA Today, Dunklee stated that when she hit the first shot, it seemed like a good sign, but she didn’t know what happened after that.

She posted the following tweet after the event on Tuesday: 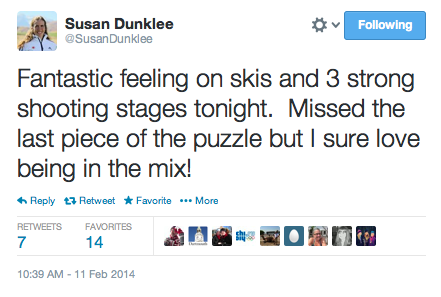 She ended up missing three of her next four targets, which forced her to ski a penalty loop of 150-meters. The penalties dropped her to 20th. She did move up to finish 18th overall, finishing highest among American athletes competing in the event.

On Sunday, Dunklee finished 14th in the 7.5-kilometer sprint (21.48.3, with one penalty) to post the top Olympic sprint finish ever by a US woman.