BARTON — Last night at 6:44 p.m. a lone male came into the Circle K gas station in Barton, demanding money from the clerk on duty. The perpetrator was waving a knife around, and wore a mask over his face.

He fled the scene on foot with an undisclosed amount of money.

He is described as being average height with a slender build. The incident was caught by surveillance cameras, which clearly show an insignia depicted on the back of the sweatshirt that could help to identify him.

Circle K management stated that they are not allowed to disclose any information regarding the incident.

Anyone with information regarding this incident is asked to contact the Vermont State Police, Derby Barracks at 802-334-8881, or call Northeast Kingdom Crimestoppers at 802-748-2222. 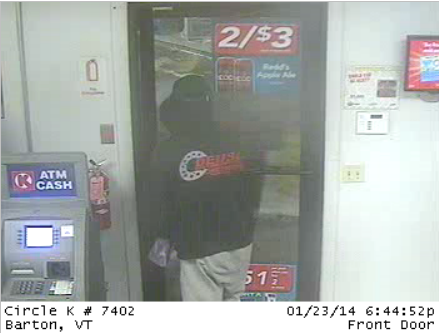