Planning a Visit to Quebec? You May Want to Leave that Smartphone or Laptop Behind - Newport Dispatch

DERBY LINE — In some cases international trips are literally a walk or bike ride away for residents of Orleans County. However you get there, if you plan to leave the United States with an electronic device, a federal judge says it “would be foolish, if not irresponsible,” to have any sensitive information on it.

On Tuesday, U.S. District Judge Edward Korman in New York upheld a policy allowing authorities along the U.S. border to seize and search laptop computers, smartphones, and other electronic devices for any reason whatsoever, without reasonable suspicion, in the name of national security.

Korman said the so-called “border exemption,” in which anyone can be searched for no reason at all along the border, continues to apply in the digital age. This Fourth-Amendment-Free Zone stretches 100 miles inland from the nation’s actual border. 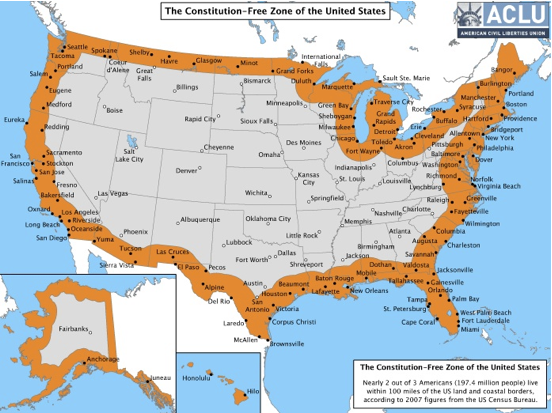 “While it is true that laptops may make overseas work more convenient, the precautions plaintiffs may choose to take to mitigate the alleged harm associated with the remote possibility of a border search are simply among the many inconveniences associated with international travel.”

The American Civil Liberties Union, who challenged the policy nearly three years ago, argued that U.S. border officials should have reasonable suspicion before searching electronic devices because of the sensitive data they store. Such devices have become virtual extensions of ourselves, storing everything from email, instant-message chats, videos, and papers.

The case was brought on behalf of a 29 year-old Islamic studies graduate student in Canada, who, in 2010, was traveling by train into New York to visit his parents. According to the lawsuit, after showing his passport to an agent he was asked to move to the cafe car, where authorities removed his laptop from his luggage, and ordered him to enter his password.

He was questioned about pictures found on the computer displaying Hamas and Hezbollah rallies, which he had gathered for a doctoral degree on the modern history of Shiites in Lebanon. He was handcuffed and jailed for three hours while authorities continued to search through his computer. He was then released, but his computer was confiscated until his lawyer later filed a complaint to get it back.

Other plaintiffs in the suit included the National Association of Criminal Defense Lawyers, who maintain the policy exposes privileged information, and the National Press Photographers Association, who say the policy interferes with their ability to do their work.

Suspicionless electronic search rules were first announced under the Bush administration in 2008, and the Obama administration followed up with virtually the same rules the following year. According to Department of Homeland Security data, between 2008 and 2010, 6,500 persons have had their electronic devices searched along the U.S. border.

DERBY — A 66-year-old man from Derby was seriously injured during a
NEWPORT — Starting on Wednesday, April 8, RCT says they will be
DERBY — Walmart has joined other large retailers in announcing a move
WEST BURKE — A fire that broke out in West Burke early
DERBY — The Agency of Commerce and Community Development has directed large
Go to Top