Disney’s princess movies are, in many ways, a trick of time dilation. Despite the ubiquity of princess-branded products in toy aisles across America, Disney only made three “princess” movies in its first 60 years of animation: “Snow White” (1937), “Cinderella” (1950) and “Sleeping Beauty” (1957). You’d be forgiven for forgetting that, since Disney abruptly changed focus and made eight more of them between 1989 and 2012 (if you count Pixar’s “Brave,” which Disney does). Disney is all about tradition, even if they have to engineer it retroactively.

The merchandising has been so prevalent that I felt a certain cynicism when I heard that “Frozen,” their latest creation, had two princesses. Disney has always made such a big deal of old-fashioned values that it almost reflexively prompts the idea that they have old-fashioned vices as well. It was hard not to imagine dollar signs popping up in somebody’s eyes over the idea of two princesses – and that may have well been the case. But, fortunately, it doesn’t feel that way when watching the movie itself. 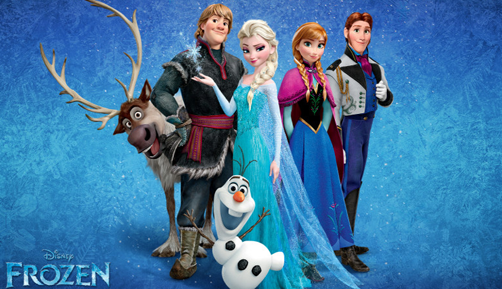 Anna (voiced by Kristen Bell) and Elsa (Idina Menzel) are sisters and princesses of the northern kingdom of Arendelle. Elsa has the ability to make snow and ice appear at will, and at the beginning of the film the princesses are children at play in their castle’s cavernous ballroom. After Elsa accidentally hits Anna in the head with a blast of ice magic, their parents, the king and queen, go to the mountains to get help from the trolls.

The trolls heal Anna, but it’s decided that Elsa’s magic is better kept a secret. Anna’s memories are changed to remove her knowledge of Elsa’s memories, and Elsa is given gloves to wear at all times. She becomes withdrawn, and after the king and queen die in a shipwreck, the two sisters live almost completely separate lives.

The story proper opens on the day Elsa comes of age and is crowned queen. She approaches the event with great trepidation, but Anna is giddy with excitement over the prospect of being able to meet people. She hits things off quickly when she runs into Prince Hans of the Southern Isles (Santino Fontana), who is visiting for the coronation. The two spend the whole day together, and by evening Hans asks Anna to marry him – to which she gleefully says yes.

Elsa is much less pleased when the two bring the news to her, and has a panic attack that unleashes her powers, causing winter in the middle of July. She flees to the mountains, prompting Anna to give chase.

The Disney princess films follow such a set list of tenets that it’s kind of startling when one of them contradicts another. Still, the romance angle of “Frozen” feels like nothing less than a rebuke of “The Little Mermaid,” in which Ariel the mermaid had three days to make a man fall in love with her. It’s strongly implied that those two live happily ever after, which is totally unrealistic, but then again it’s the story of a mermaid who has singing fish for friends. While still very much a work of fantasy, “Frozen” nevertheless draws the line a little closer to home.

The characters of Elsa and Anna themselves also follow a pattern of princesses who are increasingly self-aware. Most tellingly, they experience a lot of self-doubt, something not seen much before “Mulan” (1998), and which didn’t make another major appearance until “Tangled” (2010). In fact, Anna is a near-copy of Rapunzel from that film, which makes sense: both characters are pronounced extroverts who have grown up in near-isolation. However, Anna is slightly more resourceful and (very) slightly less spastic.

Also like “Tangled,” the cast of “Frozen” uses speech patterns and slang that are amusingly modern. Since Disney films never, ever go away, viewers will end up encountering language they find dated within 15 years or so.

With less than a decade under its belt since its first feature film, Disney’s CGI department is to be commended for how far they’ve come. The quality of the imagery here – in particular the way the auroras play off the snow and ice – is exquisite, even if it feels a little like a screensaver at times. Disney production values as a whole are up, and it’s hard to imagine that this is the same studio that accidentally made “Chicken Little” in 2005.

STANSTEAD, QC — A body that was discovered in a field in
DERBY — An American Red Cross blood drive will take place tomorrow,
ST. JOHNSBURY — Police are investigating a fatal shooting that took place
NEWPORT — The hottest air of the 2019 summer season so far
NEWPORT — The Newport Police Department says they are actively investigating incidents
Go to Top